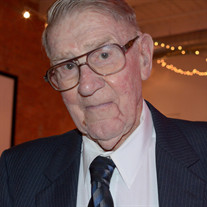 Lloyd R. Hannigan, of Brogue, went from life to Eternal Life, after a brief illness, surrounded by his family, on Tuesday, November 26, 2019, at Wellspan York Hospital at 6:55 am at the age of 96. He was the husband of Ethel I (Miller) Hannigan to whom he married on October 18, 1947, celebrating 72 years together. He was born in Chanceford Township on June 4, 1923, and was the son of the late Walter B. and Annie R. (Shaull) Hannigan. He graduated from Red Lion High School, Class of 1941 and then went into the military, serving in the Army during WWII as a Corporal T5 with the ARMY 501ST Anti Aircraft in Saipan. Lloyd was a mechanic with the former Warner’s Dairy and then the Red Lion Bus Company where he was a foreman, retiring in 1988, but continued to work part time for a few years after retirement. He was a member of the Brogue Ambulance Club and he also drove ambulance for them, an avid Penn State Fan and Pittsburgh Steelers Fan. He enjoyed gardening , raising chickens, referring to this as the “good times”, and fixing things, whether it was needed or not. Lloyd was a longtime and active member of Bethel United Methodist Church in Brogue, where he served on numerous committees. Besides his wife, Ethel, he leaves a son, Dean E. Hannigan of Windsor and his wife Linda. He was the loving grandfather of Amy Zea and her husband Dale of Red Lion, Daniel Hannigan and his wife Jessica of Clarksville, TN and Troy Hannigan and his wife Erike of Philadelphia, and a great grandfather to Hayley, Alexander, Brayden, Dayne, Addyson, Ena and Ellis. He has a brother, Earl Hannigan of Windsor and a sister, Reba Berwager of Red Lion, along with numerous nieces and nephews. Lloyd was preceded in death by a son, Dennis E. Hannigan on May 4, 1986 and his four brothers, John, Paul, Walter, and Dale Hannigan who died serving his country during WWII, and his sister, Ruth Neuhaus. Viewings for Lloyd will be on Sunday, December 1st, from 6-8 pm and also on Monday, December 2nd, from 10-11 am at Burg Funeral Home, Inc., 134 W. Broadway, Red Lion. A Service of Honor and Praise will begin at 11 am at the funeral home with his pastor, Rev. Kim Cartwright, officiating. Burial will be in Bethel UM Cemetery, with full military rites offered by the York County Veterans Honor Guard. Lloyd was a wonderful husband to Ethel, and great father and grandfather. He enjoyed playing games with his great grandchildren and spending time with his family. In lieu of flowers, contributions may be offered to: Bethel UM Church, 1674 Furnace Road, Brogue, Pa 17309.

Lloyd R. Hannigan, of Brogue, went from life to Eternal Life, after a brief illness, surrounded by his family, on Tuesday, November 26, 2019, at Wellspan York Hospital at 6:55 am at the age of 96. He was the husband of Ethel I (Miller) Hannigan... View Obituary & Service Information

The family of Lloyd R. Hannigan created this Life Tributes page to make it easy to share your memories.

Send flowers to the Hannigan family.