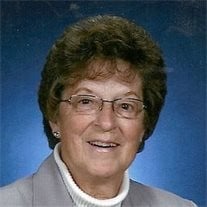 Loretta C. (Raffensberger) Jackson went home to be with her Lord and Savior, surrounded by her loving family on Sunday, June 22, 2014 after a brief illness at 12:46 a.m. at York Hospital at the age of 72. She was the wife of Richard E. Jackson of Red Lion to whom she married on March 8, 1958. Loretta was born in York Twp. on November 10, 1941, and was the daughter of the late Millard C. and Luella (Sterner) Raffensberger. Loretta worked as a secretary at the former AMP, Inc., retiring in 1998 after 33 years of service; she was a 50-year member of Winterstown United Methodist Church where she was very active volunteering in various ways within the church; a member of the Steam-o-Rama in Windsor. Loretta is survived by her husband, Richard of Red Lion,; three daughters, Wendy Mummert of Windsor and husband Bradley, Debra Willwert of Red Lion and husband Robert, and Lori Jackson of Red Lion; eight grandchildren, Robby, Bryan, Brett, Tristan, Erica, Christopher, Wesley and Nicholas; and two great-grandchildren, Cade and Lily; three sisters, Edna Graser of Red Lion, Norma Wolf of New Freedom and Rosalie Grim of Red Lion; and a brother, Larry Raffensberger of York; numerous nieces and nephews. Viewings will be held Wed., June 25 from 7 to 9 p.m. at Burg Funeral Home, Inc., 134 W. Broadway, Red Lion, and Thurs., June 26 from 9 to 10 a.m. at Winterstown United Methodist Church, 12184 Winterstown Road, Felton. A Service of Honor and Praise for Loretta will be on Thurs. at 10 a.m. at the church. Her pastor, the Rev. Keith J. Schmuck will officiate. Burial will be in Susquehanna Memorial Gardens. In lieu of flowers, contributions may be offered to: York Cancer Center/Cancer Patient Help Fund, 50 N. Duke St., Second Floor, York, PA 17401. Loretta was a wonderful wife to Richard, just celebrating 56 years together. She was a very caring and loving Mother and Grandmother who always put her family first. Loretta and Richard traveled exclusively to other countries which she really enjoyed but her favorite was to Ireland. She was an awesome cook who could take enough ingredients to feed three and make a meal in a very short time to feed five. Loretta also had a fondness for all animals. She will be greatly missed by anyone who knew and loved her. Online condolences may be offered at www.BurgFuneralHome.com.

Loretta C. (Raffensberger) Jackson went home to be with her Lord and Savior, surrounded by her loving family on Sunday, June 22, 2014 after a brief illness at 12:46 a.m. at York Hospital at the age of 72. She was the wife of Richard E. Jackson... View Obituary & Service Information

The family of Loretta C. Jackson created this Life Tributes page to make it easy to share your memories.

Loretta C. (Raffensberger) Jackson went home to be with her Lord...

Send flowers to the Jackson family.