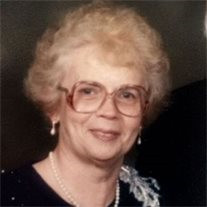 On Sept 12, 2016, Lucreta Rosella (Leiphart) Grim entered into God's eternal peace, joining her husband, the late L. Palmer Grim Jr. She is also preceded in death by her parents John Franklin and Isabel (Gilbert) Leiphart and her brother, John Leiphart. She is survived by three children: Lou Grim of New Castle, DE, Jeanne S Grim D.V.M. of Marietta, GA and Tracey (Grim) Deardorff M.D. of York; her son in law Kris Deardorff and grandchildren, Jennifer and Kyle Deardorff; her two sister in laws, Charlene (Grim) Bonekemper of Lansdale and Janet Leiphart of Clearwater, FL and cousins, Carlton and Estola Grim of Dallastown. Lucreta was born on January 17, 1933 in a farmhouse near Craley, PA. She often shared fond memories of her childhood, growing up on a small farm, attending one-room school in Martinsville, PA and the nostalgic remembrances of a simpler time. She attended Red Lion High School and graduated as salutatorian in 1950. She married Palmer in April 1953 and they had 3 children. In 1965, she returned to school and told her husband "if you put me through college, I'll put the kids through college" – which she did. She graduated with a BS in mathematics and a M.Ed. from Millersville University. She taught math and computer science at Red Lion High School for 22 years. She was a caring but tough teacher and her family can attest to the hours of time she spent devoted to her students. After retiring, she was able to spend more time with her young grandchildren who are blessed to have the memories of Nanny and Pappy Grim. She and Palmer loved to travel and especially enjoyed trips to Europe, Hawaii, the US National Parks and several train trips across America. She was passionate about sports and her favorite teams: Penn State football, Duke and Maryland basketball, the Baltimore Ravens and the Orioles. She inspired her children, students and her colleagues with her work ethic. Above all, she was an amazing mother and the glue that held her family together. In her last years, she fought the formidable opponent of Alzheimer's with toughness and dignity. She will be forever missed by her family. A Viewing for Lucreta will be on Sat, Sept. 17th from 9:30-10:30 am at Burg Funeral Home, Inc., 134 W. Broadway, Red Lion. A Service of Honor and Praise will begin at 10:30 am on Sat. at the funeral home with Pastor Tim A. Funk of St. Paul's UM Church officiating. Burial will be at Zion UM Cemetery. Donations may be made to the Alzheimer's Association GPA; 3544 N. Progress Ave., Suite 205 Harrisburg, PA 17110.

The family of Lucreta Rosella (Leiphart) Grim created this Life Tributes page to make it easy to share your memories.