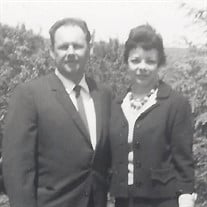 Mable K. (Cook) Foreman, formerly of Yorkana, entered into God’s care on Thursday, December 26, 2019, at 1:50 am at Manor Care South, at the age of 99. She was the wife of the late Curvin M. Foreman who entered into rest on October 25, 2001, with whom she was married to for 52 years. Mable was born on August 8, 1920 in York, and was the daughter of the late Leo and Julia E. (Mitzel) Cook. She retired from Roanna Girl Garment Factory in Hellam after many years of service. Mable attended Christ United Methodist Church in Yorkana. She was a member of the Canadochly Ambulance Club and enjoyed hunting with bow and arrow. She is survived by numerous nieces and nephews and was one of six children, preceded by her three brothers, Anthony Cook, Harry Cook, Robert Cook, and her two sisters, Eleanor Cook Lentz, and Esther Cook Frey. There will be no viewing. A visitation will be on Thursday, January 2nd from 9:30 – 10:00 am at Burg Funeral Home, Inc., 134 W. Broadway, Red Lion. A service of Honor and Praise for Mable will begin at 10 am with her pastor, Rev. Jason Guillaume, officiating. Burial will follow at Yorkana Cemetery. In lieu of flowers, contributions may be offered to: American Heart Association, 610 Community Way, Lancaster, PA 17603.

The family of Mable K. (Cook) Foreman created this Life Tributes page to make it easy to share your memories.

Send flowers to the Foreman family.