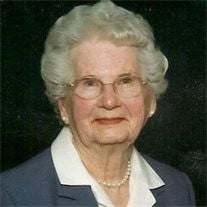 Margaret G. (Throne) Botts, 99, entered into rest peacefully after a brief illness on Friday, January 18, 2013, at 9:10 a.m. at her residence. She was the wife of George C. Botts, who entered into rest on January 2, 1996. Born in East York on December 30, 1913, she was the daughter of the late Amos G. and Margie (White) Throne. She was a 1933 graduate of North York High School. Margaret was a registered nurse. She graduated from the York Hospital School of Nursing in 1936 and worked at York Hospital in the Pediatric Department for many years. She was a lifetime member of Yorkshire United Methodist Church in York where she was in the 55+ Club, Golden Band Sunday School. She loved bird watching, traveling, knitting and crocheting. Surviving are three daughters, Mary C. Leiphart, M. Susie Grothe and husband, Junior and Ruth L. Klinedinst, all of Red Lion; nine grandchildren; five great-grandchildren; and two great-great-grandchildren; two sisters, R. Roberta Throne of York and S. Marie Hershberger of Cape Canaveral, Fla.; cousin, Charlotte Hively of York; and nieces and nephews. She was preceded in death by two daughters, Roberta A. Arnold in 1966 and Jane M. Crumling in 2009; and two brothers and four sisters. There will be no viewing. Family and friends may extend condolences on Thursday from 9 to 10 a.m. at Yorkshire UM Church, 125 Edgewood Road, York. Burg Funeral Home, Inc., 134 W. Broadway, Red Lion, will be handling the arrangements. The service will be 10 a.m. Thursday at the church, with her pastor, the Rev. Dennis A. Hummel, officiating. Burial will be private at Windsor Cemetery at the convenience of the family. In lieu of flowers, contributions may be offered to: Yorkshire UM Church, 125 Edgewood Road, York, PA 17402; or the Compassionate Care Hospice, 2449 S. Queen St., York, PA 17402. Today our family lost a true matriarch. Her life inspired so many of us both inside and outside of the family. She was a devoted wife, mother and an RN who raised 5 beautiful and accomplished daughters. Margaret never asked anyone for anything she couldn't do herself and it is an attitude that runs through our entire family to this day. We love you so much, and we hope you will rest in peace. Online condolences may be offered at: www.BurgFuneralHome.com

The family of Margaret G. Botts created this Life Tributes page to make it easy to share your memories.

Send flowers to the Botts family.