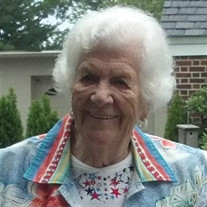 Mary Emma (Roseman) Fuhrman, of Dallastown, went home to be with her Lord and Savior on Thursday, August 29, 2019, at 6 pm at her residence, at the age of 97. She was the wife of the late Russell W. Fuhrman who entered into rest on August 30, 1988. Mary was born in Winterstown on July 3, 1922, and was the daughter of the late James Clark and Nellie (Oberlander) Roseman. She graduated from York High School, Class of 1940. Mary was the owner and operator of the Leader Flower and Gift Shop in Dallastown for forty years. She was a longtime member of the Winterstown United Methodist Church in Felton and the Sunday School Class. She belonged to the ladies auxiliary of both, the Red Lion VFW, Post #1446, and the Dallastown American Legion, Post # 605. Mary was a member of Gold Star Mother’s, the former Red Lion Order of the Eastern Star Chapter # 517, Dr. J.M. Hyson Memorial Court #106 Order of the Amaranth. Mary is survived by her son, Russell “Ed” E. Fuhrman and his wife Jane of Red Lion, and her daughter in law, JoAnn Besecker of York. She was the loving grandmother of five grandchildren, Lisa Petzar (Steve) of Red Lion, Teresa Fuhrman (Kevin Mitchell) of Red Lion, John Carman (Judy) of Dallastown, Melissa Carman (Sue Thomas) of Dover, Michael Besecker (Sherri) of Austin, Texas, and great grandmother of nine, Ryan (Kerri) and Logan Petzar, Tanner Carman, Ashley Snyder (Tony), Aaron and Casey Mundis, Arden, Camden and Lynden Besecker; as well as great great grandmother to James Mundis and Charlie Jane Petzar. She was preceded in death by her son, James Fuhrman in 1970, her daughter, Kay E. Carmen and her son in law, Dennis Carman. Viewings will be on Tuesday, September 3rd, from 6-8 pm at Burg Funeral Home, Inc., 134 W. Broadway, Red Lion, and on Wednesday, September 4th from 9:30 to 10:30 am at Winterstown United Methodist Church, 12184 Winterstown Road, Felton, with her pastor, Rev. David K. Shultz, assisted by Rev. Richard L. Bowers. A Service of Honor and Praise for Mary will begin at 10:30 am at the church. Burial will follow the service in Winterstown UB Cemetery. Mary was a wonder mother and friend to many. She loved life and lived it to the fullest. She was a very artistic and creative person, and enjoyed coloring. She lived for her Lord, and sharing time with her family and host of friends. Don’t grieve for me, for now I’m free. I’m following the path God laid for me. I took his hand when I heard him call. I turned my back, and left it all. Don’t lengthen it now with undue grief. Lift up your heart and share with me. God wanted me now, “HE SET ME FREE.” In lieu of flowers, contributions may be offered to: Winterstown UM Church, 12184Winterstown Road, Felton, PA 17322, or White Rose Chapter 1032, Vietnam Veterans of America, 129 East Market St., York, PA 17401, or to the American Gold Star Mother's (AGSM), c/o: Joan Snyder, 13864 Blymire Hollow Road, Stewartstown, PA 17363. www.BurgFuneralHome.com

Mary Emma (Roseman) Fuhrman, of Dallastown, went home to be with her Lord and Savior on Thursday, August 29, 2019, at 6 pm at her residence, at the age of 97. She was the wife of the late Russell W. Fuhrman who entered into rest on August 30,... View Obituary & Service Information

The family of Mary Emma (Roseman) Fuhrman created this Life Tributes page to make it easy to share your memories.

Mary Emma (Roseman) Fuhrman, of Dallastown, went home to be with...

Send flowers to the Fuhrman family.