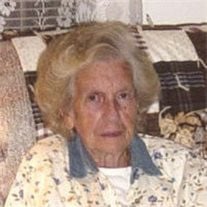 Mary E. (Jones) Gillespie, 87, entered into rest at 1:46 p.m. Wednesday, May 5, 2010, at Manor Care-Dallastown. She was the wife of George S. Gillespie, who entered into rest on December 12, 1987. She was born in Russell County, Va., on April 4, 1923, and was the daughter of the late Ed and Julia Jones. She was a laborer at a cannery and Naylor's Winery. Mrs. Gillespie was a member of Windsor Assembly of God. Mary was an avid reader, enjoyed watching TV, playing bingo, working with puzzles, and traveling. She is survived by three sons, Joey A. Gillespie and Edward Gillespie, both of Stewartstown, and Mark A. Gillespie of York; two daughters, Brenda Asbury of Fawn Grove and husband, Oscar, and Angela J. Harr of Wrightsville; nine grandchildren; ten great-grandchildren; one brother, Melvin Jones of York; and two sisters, Carrie M. Harris and Edna M. Roberts, both of Ohio. She was preceded in death by three sons, John Edward Gillespie, Bobby Wesley Gillespie, and George "Lynn" Gillespie; and daughter, Patricia Mae Blouse. Viewings will be 6 to 8 p.m. Sunday and 9 to 10 a.m. Monday, May 10, at Burg Funeral Home, Inc., 134 W. Broadway, Red Lion. The service will begin at 10 a.m. Monday at the funeral home. Burial will be at Susquehanna Memorial Gardens. Contributions may be offered to the York Rescue Mission, P.O. Box 1968, York, PA 17405-1968.

The family of Mary E (Jones) Gillespie created this Life Tributes page to make it easy to share your memories.