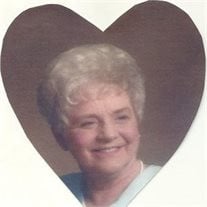 Mary E. (Mitzel) Jacka, formerly of Shippensburg, entered into eternal rest on Tuesday, August 4, 2015 at 6:30 a.m. at Country Meadows in York, at the age of 81. She was the wife of Carl G. Jacka who entered into eternal rest on Nov. 3, 2008. Mary was born on July 4, 1934 in Red Lion and was the daughter of the late John K. and Olive N. (Campbell) Mitzel. Mary worked in Retail as a sales manager. She previously attended Bethany UM Church in Red Lion and was a member of Eastern Star in Huntsville, Ala. Survivors include one son, Carl G. Jacka, II and wife, Patricia of Kennesaw, Ga.; one daughter, Peggy L. Oliver of Oklahoma City, Okla.; and a daughter- in- law, Susan R. Jacka of Huntsville; seven grandchildren; nine great-grandchildren and expecting a 10th great- grandchild; three brothers, Donald C. Mitzel and wife, Jean of Lehigh, Fla., Harry C. Mitzel and wife, Brenda of York and Warren C. Mitzel of York; niece, Teresa Myers with whom Mary had a very special relationship; as well as numerous nieces and nephews. In addition to her parents and husband, she was preceded in death by a son, Howard E. Jacka in 2010. Viewing Saturday, August 8 from 10 to 11 a.m. at Winterstown United Methodist Church, 12184 Winterstown Road, Felton. A Service of Honor and Praise for Mary will begin at 11 a.m. on Saturday at the church. The Rev. Mitchell M. Galloway will officiate. Burial will be in Susquehanna Memorial Gardens. Arrangements are in the care of Burg Funeral Home, Inc., 134 W. Broadway, Red Lion. Mary was a loving mother, sister and grandmother. She will be greatly missed by all who knew and loved her. Online condolences may be offered at www.BurgFuneralHome.com

The family of Mary E. (Mitzel) Jacka created this Life Tributes page to make it easy to share your memories.