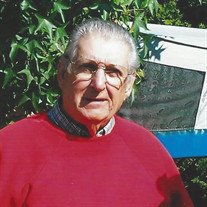 Max Ray Stump of Jacobus was ushered to his eternal home, to sit by the side of his Lord and Savior on Wednesday, January 27th, at 8:34 am at the home of his son, with whom he resided, at the age of 90. He was the husband of the late Maurita Mae (Timmens) Stump who entered into rest on March 19, 2003. He was born in York, on May 12, 1930 and was the son of the elate Harry Edward and Mary (Stein) Stump. Max was a postal clerk with the York Post Office, retiring after many, many years of service. He attended New Hope Bible Church in Seven Valleys. He enjoyed playing board games and 500. Max was an avid fisherman, and loved going antiquing with his son, who was also his buddy. He was a Penn State fan and loved planting fruit trees. He planted about 200 apple trees at his daughter’s residence, and his "Love Machine" was his baby. Max was a United States Navy Veteran, serving on the USS Norris. During his military time, he received the National Defense Service Medal and the Navy Occupation Service Medal. Max has two children, his son, Michael L. Stump of Jacobus, a daughter, Michele L. Wenkheimer and her husband James, of Spencerville, Indiana. He was the loving grandfather to; James Wenkheimer (Alex) of Blue Earth, MN, Nicole Frohberg (Trevor) of Fort Wayne, Indiana and Bradley Stump of Seven Valleys, and the great grandfather of Raegan, Max and Leo. He leaves his brothr, Palmer Stump of Fresno, CA., numerous nieces, and nephews and his granddog, Ripken, a golden retriever. He was preceded in death by his daughter in law, Doris Jean (Mummert) Stump on March 24, 2014 and his two brothers, Harry Stump, Jr. and Ned Stump. Viewing will be on Tuesday, February 2nd, from 6-7 pm at Burg Funeral Home, Inc., 134 W. Broadway, Red Lion. A Service of Honor and Praise for Max will begin at 7 pm at the funeral home with his pastors, Christ Loftquist and Don Clark officiating. A Graveside Service will be on Wednesday at 10 am at Susquehanna Memorial Gardens. All attending the graveside are asked to meet there prior to the start of the service. Full military honors will be offered by the York County Veterans Honor Guard. If attending the services, please wear a mask and follow the social distancing guidelines. In lieu of flowers, contributions may be offered to: New Hope Bible Church, 1656 Smeltzer Road, Seven Valleys, PA 17360. Online condolences may be offered at: www.BurgFuneralHome.com

Max Ray Stump of Jacobus was ushered to his eternal home, to sit by the side of his Lord and Savior on Wednesday, January 27th, at 8:34 am at the home of his son, with whom he resided, at the age of 90. He was the husband of the late Maurita... View Obituary & Service Information

The family of Max Ray Stump created this Life Tributes page to make it easy to share your memories.

Max Ray Stump of Jacobus was ushered to his eternal home, to...

Send flowers to the Stump family.