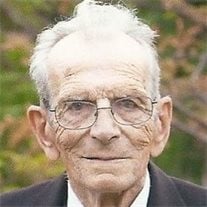 Mearl "Cap" C. Newcomer, 86, entered into eternal rest on Sunday, November 2, 2014, at Victorian Villa, Dallastown. He was the husband of Sara Jean (Sheffer) Newcomer, who entered into rest on September 17, 2013. He was born in York, on August 17, 1928, and was the son of the late Lucy (Ruppert) Newcomer. Mearl worked in the trucking industry for various companies. He also worked at Bob's Weld Shop for many years. Surviving are his son, Brian M. Newcomer; three daughters, Darla A. Liddle and husband, Jim, Rebecca S. Snelbecker and husband, Bob, and Robyn A. Cox and companion, Chris Staner; 11 grandchildren, Stefanie Crone, Blake Gross, Ben Snelbecker, Jereme Gross, Joanna Hamme, Brett Newcomer, Sara Newcomer, Jarrod Newcomer, Brooke Wealand, Tia Cox, and Tessa Cox; numerous great-grandchildren; one great-great-granddaughter; a brother, Charles Newcomer, who lived with him at Victorian Villa; and several nieces and nephews. He was preceded in death by two sons, Keith Allen Newcomer and Kevin Blaine Newcomer; a great-granddaughter, Allison Clair Gross; a brother, Curt Newcomer; and a sister, Thelma Hilbert. There will be no viewing. Cremation will take place with Burg Funeral Home, Inc., 134 W. Broadway, Red Lion. Family and friends are invited to extend their condolences on Saturday, November 8, 2014, from 11 a.m. to 12 p.m. at Calvary Evangelical Lutheran Church, 9 N. Main St., Dover. A Memorial Service of Honor and Praise for Mearl will begin at 12 noon at the church with the Rev. John M. Woods officiating. Burial will be at Suburban Memorial Gardens at the convenience of the family. In lieu of flowers, contributions may be offered to Alzheimer's Association GPA, 3544 N. Progress Ave., Suite 205, Harrisburg, PA 17110. Mearl enjoyed the outdoors. He was an avid hunter and golfer. He was a very hard worker who, in his earlier years, held three jobs to provide for his family. He loved his family dearly and was a kind and gentle man who will be greatly missed by all. Online condolences may be made at www.burgfuneralhome.com

Mearl "Cap" C. Newcomer, 86, entered into eternal rest on Sunday, November 2, 2014, at Victorian Villa, Dallastown. He was the husband of Sara Jean (Sheffer) Newcomer, who entered into rest on September 17, 2013. He was born in York, on August... View Obituary & Service Information

The family of Mearl C. Newcomer created this Life Tributes page to make it easy to share your memories.

Send flowers to the Newcomer family.