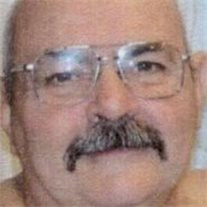 RED LION Mervin L McKinsey, Jr., 58, entered into rest at 12 a.m. Friday, June 24, 2011, his residence. He was the husband of Barbara A. (Carroll) McKinsey. Mervin was born in York, on August 31, 1952, and was the son of the late Mervin L., Sr. and Ruth H. (Harrison) McKinsey. He attended Trinity United Methodist Church in York. He worked maintenance for the Army Corps of Engineers at Indian Rock Dam. He also worked as a welder for the former Cole Steel. He was a very hard worker, but he loved spending time with his family. He also enjoyed painting. In addition to his beloved wife, Barbara, he is survived by two children, Danielle McKinsey of York and Steven McKinsey of Red Lion; two granddaughters, Ashley and Rachel McKinsey; four brothers, Roger McKinsey and wife, Joyce of Stewartstown, George McKinsey and wife, Brenda of Dover, and Howard McKinsey and Dale McKinsey, both of York; one sister, Rosalie Messersmith and husband, Barry of York; and numerous nieces and nephews. He was preceded in death by three granddaughters, Kayla, Corissa, and Alyssa McKinsey; and one brother, Leroy McKinsey. Viewing will be Tuesday from 6 to 7 p.m. at Burg Funeral Home, Inc., 134 W. Broadway, Red Lion. The service will begin at 7 p.m. Tuesday at the funeral home with the Rev. Jeffrey S. Swanger, pastor of Trinity United Methodist Church, officiating. Burial will be private and at the convenience of the family. In lieu of flowers, contributions may be offered to York Health Foundation "Cancer Patient Help Fund", 912 S. George St., York, PA 17403; or to the VNA Hospice, 540 S. George St., P.O. Box 2404, York, PA 17403. Mervin was a loving husband, father and grandfather. He will be sadly missed.

The family of Mervin L. McKinsey, Jr. created this Life Tributes page to make it easy to share your memories.

Send flowers to the McKinsey, family.