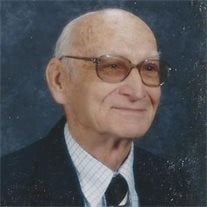 Meryl S. Burkholder, formerly from Red Lion, entered into God's eternal care on Wednesday, May 9, 2018 at Manor Care Dallastown at 10:15 am at the age of 91. He was the wife of the late Betty L. (Aubel) Burkholder who entered into rest on December 21, 2008. He was born in York on June 12, 1926 and was the son of the late John F. and Ethel N. (Snyder) Burkholder. Meryl was a Truck Driver for the former Consolidate Freightways retiring after many years of service. He was a long time member of the Red Lion Bible Church. He enjoyed gardening and listening to gospel music. Meryl is survived by six sons, Robert Burkholder and his wife Sandy of Delaware, Donald Burkholder and his wife Shirley of Delaware, Meryl Burkholder, Jr. and his wife Becky of Delaware, Robert "Bobby" Aubel and his wife Sue of Lancaster, Jim Johnson and his wife Missy of Red Lion and Terry Burkholder and his wife Sandy of Red Lion and two daughters, Barbara Roop of Dallastown and Linda Horton and her husband Derrell of East Prospect. He was the grandfather, great grandfather and great -great grandfather to many. Meryl has two brothers, Delmar Burkholder and Vincent Burkholder and a sister, Fern Adkins, along with numerous nieces and nephews. He was preceded in death by his son, James Burkholder in 1989 and a sister, Elaine Moser. Viewing will be on Monday, May 14th from 6-7 pm at Burg Funeral Home, Inc., 134 W. Broadway, Red Lion. A Service to Honor and Praise Meryl's life will begin at 7 pm at the funeral home. Rev. Steven A. Schmuck, Pastor of Red Lion Bible Church will officiate. Burial will be private, at Susquehanna Memorial Gardens at the convenience to the family. In lieu of flowers, contributions may be offered to: Red Lion Bible Church, 105 Springvale Road, Red Lion, PA 17356. The family would like to sincerely thank the Heartland Hospice and the staff of Manor Care Dallastown for all of the wonderful and compassionate care they received during this difficult time. God saw you getting tired and a cure was not to be, so He wrapped his arms around you and whispered "come to me". A golden heart stopped beating, hardworking hands now rest. He broke our hearts to prove to us, He ONLY TAKES THE BEST. We'll see you again someday.

Meryl S. Burkholder, formerly from Red Lion, entered into God's eternal care on Wednesday, May 9, 2018 at Manor Care Dallastown at 10:15 am at the age of 91. He was the wife of the late Betty L. (Aubel) Burkholder who entered into rest on December... View Obituary & Service Information

The family of Meryl S. Burkholder created this Life Tributes page to make it easy to share your memories.

Send flowers to the Burkholder family.