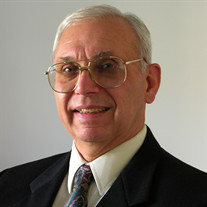 Michael “Mike” Deveron Jacoby, of Seven Valleys, entered into rest, unexpectedly, on Tuesday, at his residence at the age of 68. He is the husband of Barbara E. (Ewen) Jacoby, to whom he married on July 10, 1976, celebrating 43 years together. Mike was born in York on July 9, 1951, and was the son of the late Ralph D. Jacoby and Doris L. (Lehman) Jacoby Kaye. He was self-employed, owner and operator of the former Jacoby Enterprises. He graduated from Dallastown High School, Class of 1969. Mike attended New Fairview Church of the Brethren growing up. He enjoyed spending time with his family, attending his grandchildren’s activities, socializing with friends and neighbors and had a special interest in improving community emergency response. He was a United States Army Veteran serving as a Military Policeman during the Vietnam War. Besides his wife, he leaves a son, Michael “Cory” C. Jacoby and his wife Jenn of Dallastown, a daughter, Jennifer E. Smitka and her husband Joe of York. He was the loving grandfather of Lily and Nate Jacoby and Alex and Anna Smitka. Mike has a sister, Jane LoPiccolo and her husband Tony of Glen Rock and a brother, R. David Jacoby, Jr. of York, along with a niece, nephews, aunts, uncles, cousins, and a brother-in-law, Jim Ewen of Granby, MA. There will be no viewing. Cremation will take place with Burg Funeral Home, Inc., 134 W. Broadway, Red Lion. A Memorial Service to Honor and Cherish Mike will begin at 11 am on Wednesday, January 15th, at New Fairview Church of the Brethren, 1873 New Fairview Church Road, York. Family and friends may extend their condolences from 10-11 am at the church, just prior to the service. Burial will be private and at the convenience of the family. In lieu of flowers, contributions may be offered to: Loganville Volunteer Fire Company, 16 Mill Street, Loganville, PA 17342.

Michael &#8220;Mike&#8221; Deveron Jacoby, of Seven Valleys, entered into rest, unexpectedly, on Tuesday, at his residence at the age of 68. He is the husband of Barbara E. (Ewen) Jacoby, to whom he married on July 10, 1976, celebrating 43 years... View Obituary & Service Information

The family of Michael Deveron Jacoby created this Life Tributes page to make it easy to share your memories.

Send flowers to the Jacoby family.