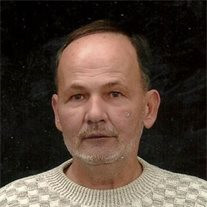 Michael "Mike" L. Boettcher entered into eternal rest unexpectedly on Friday, March 20, 2015, at his residence at the age of 62. He was the husband of Lorna J. (Fitz) Boettcher of York. Mike was born in York on October 5, 1952, and was the son of the late Erdmann and Isabelle (Ritz) Boettcher. Mike was a Truck Driver for Consolidated Freightways in York, retiring in 2008, a graduate of Dallastown High School Class of 1970, and a member of the Teamsters Local Union #430. Surviving besides his wife, Lorna of York is a daughter, Amy S. Wildasin of Spring Grove and her husband Nick; and a son, Chad S. Boettcher of York and his wife Amanda; four grandchildren, Michael, Madison, Kayla and Raylan; a sister, Beverly Seitz of York; and two brothers, Jeffrey Boettcher of York and Rick Boettcher of Florida; several nieces and nephews. He was preceded in death by a brother, Randy Boettcher. Viewings will be held Wednesday from 6 to 8 p.m. and Thursday from 9 to 10 a.m. at Burg Funeral Home, Inc., 134 W. Broadway, Red Lion. A Service of Honor and Praise for Mike will begin on Thursday at 10 a.m. at the funeral home. The Rev. Marion Haynes-Weller, pastor of Kreutz Creek Presbyterian Church will officiate. Burial will be in Mt. Rose Cemetery. In lieu of flowers, contributions may be offered to York County SPCA, 3159 Susquehanna Trail North, York, PA 17406. Mike devoted his life to taking care of his wife, Lorna, who he married on July 12, 1980. He was a doting grandfather who enjoyed spending time with his grandchildren, tinkering in various ways around the house and he loved gardening and flowers. Our family chain is broken, and nothing seems the same, but as God calls us one by one, the chain will link again. Forever in our hearts! Online condolences may be offered at www.BurgFuneralHome.com

Michael "Mike" L. Boettcher entered into eternal rest unexpectedly on Friday, March 20, 2015, at his residence at the age of 62. He was the husband of Lorna J. (Fitz) Boettcher of York. Mike was born in York on October 5, 1952, and was the son... View Obituary & Service Information

The family of Michael "Mike" L. Boettcher created this Life Tributes page to make it easy to share your memories.