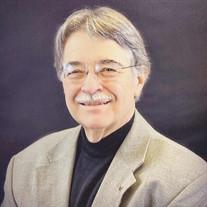 Michael G. Miller, of York, went from life-to-Life Eternal on Saturday, April 24, 2021 at 11:25 AM at his residence the age of 73. Michael was born in York on September 14, 1947 and was the son of Gordon O. and Jeune E. (Golden) Miller. He was a graduate of Red Lion High School, class of 1965, and was a member of the golf team. During high school, Michael was the grounds keeper for the former Red Lion Country Club and after high school, went on to obtain his Associates in Drafting and Design from Penn State York, attending 1965 – 1967. Michael was a professional engineer and worked for the former Buchart Horn & Associates, where he retired from after 25 years. He sat on the York City School Board where he served as the VP, was former President of the New Oxford LIU 12 for several years and also served on the York City Zoning Board as well as the Dr.’s Row Neighborhood Association and Susquehanna Valley Chapter Victorian’s Society. In addition to being very community oriented, Michael was very fond of and loved music and had an interest in learning about tangible objects from past generations. He is survived his brother, Wayne L. Miller of Red Lion and his three best friends from high school, along with many others he met throughout the years. Cremation will take place with Burg Funeral Home, Inc., 134 W. Broadway, Red Lion. Services and burial will be private and at the convenience of the family at a later date at Heiland View Cemetery with Father Wicky L. Barnes, III. officiating. In lieu of flowers, donations may be offered in Michael’s memory to Grace Lutheran Church c/o Organ Fund, 220 N. Charles Street, Red Lion, PA 17356.

The family of Michael G. Miller created this Life Tributes page to make it easy to share your memories.

Michael G. Miller, of York, went from life-to-Life Eternal on...