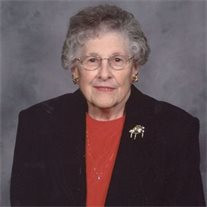 RED LION Mildred E. (Sechrist) Barshinger, 90, entered into rest after a lengthy illness at 1:10pm Thursday, November25, 2010 at Victorian Villa in Dallastown. She was the wife of Robert O. Barshinger, who entered into rest on May 11, 1973. Born in Red Lion, on July 13, 1920, she was the daughter of the late Charles S. and Katie (Shue) Sechrist. She had worked in the cafeteria at Red Lion Junior High and retired in 1992 after 33 years of service. She was a graduate of Red Lion High School in the class of 1938. Mrs. Barshinger was a life-long memeber of Bethany Umited Methodist Church in Red Lion and its Sunday School class "Four-Fold Friends", and a 70-year member of Bethany's chair. She was a charter life member and a past matron of Rainbow Chapter #517 Order of the Eastern Star in Red Lion; life member of the York County Chapter of PA Association of School Retirees; Red Lion AARP #1773; Dallastown Golden Age Club; and widows support group. Surviving are two grandsons, Brett A. Osborne and wife, Kimberly of Reading, and Matthew S. Osborne and wife, Traci of Temple; one great grandson, Joshua B. Osborne of Reading; two great granddaughters, Abby S. and Emma L. Osborne of Temple; a sister-in-law, Pauline Robinson and Husband William of York; and neices and nephews. She was preceded in death by her only daughter, Susan A. (Barshinger) Osborne, who entered into rest September 30, 1980; and a brother, C. Elmer Sechrist and his wife, Margaret. There will be no viewing or visitation. Burg Funeral Home, Inc. will be conducting the service to be held on Wednesday, December 1, Family and friends are invited to attend the service which will begin at 7pm at the funeral home with her pastor, Rev. James E. VanZandt officiating. Burial will be private and at the convience of the family in Susquehanna Memorial Gardens. Contributions may be offered to Bethatny UM Church, 121 W. Broadway, Red Lion, PA 17356, or to the York County SPCA, 3159 Susquehanna Trainl North, York, PA 17402.

The family of Mildred E. Barshinger created this Life Tributes page to make it easy to share your memories.

Send flowers to the Barshinger family.