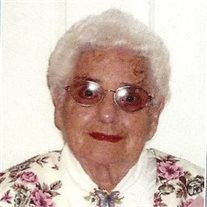 Mildred "Millie" G. (Gulden) Howard, formerly of Windsor entered into eternal rest on Wed., Feb. 24th at 3:40 pm at Manor Care North at the age of 89. She was married to the late Donald L. Howard, Sr. whom entered into rest on Aug. 23, 2011. Millie was born in Hanover, PA on May 28, 1926 and was the daughter of the late Charles and Martha V. (Resh) Gulden. After graduating from High School, Millie went to the Apostolic College where she obtained her nursing degree. She worked as a Registered Nurse for 27 years from 1960 to 1987. She started her career at Hanover Hospital then worked at Columbia Hospital and later at York Hospital as Head Nurse, until her retirement.; a life member of Grace Lutheran Church in Red Lion, she was the Vet's Activity Director and the Program Coordinator of the AARP in Red Lion; she volunteered at the Red Lion Senior Center, and was a past president of the Daughters of Grace Lutheran; Troup Leader of the Girl Scouts and Cub Scouts in both Windsor and Hanover. Millie leaves to cherish her memory, 4 sons- Donald L. Howard, Jr. and wife Lynn of Airville, Randy L. Howard of Dallas, PA; Courtland D. Howard and wife Lori Campbell-Howard of Red Lion and Todd A. Howard and wife Mary of Ocean Pines, MD; and a daughter- Lori A. Blymire and husband David of York; 9 grandchildren- Ashley Capp, Thomas Howard, Abby Schrum, Alex Howard, Katherine Ingraham, Caroline Howard, Dakota Blymire, Nathan Campbell, Nicholas Campbell, 4 great grandchildren- Jordana Capp, Jasper Capp, Judah Howard, John Ingraham; a sister- Mary Brinton of Hanover and her brother- Kenneth Gulden of Hanover; numerous nieces and nephews. She was preceded in death by a sister- Luella Small and two brothers- Luther Gulden and Burnell Gulden. There will be a viewing on Tues., March 1st from 6-8 pm at Burg Funeral Home, Inc., 134 W. Broadway, Red Lion and Wed. from 9-10 AM at Grace Lutheran Church, 220 N. Charles St. Red Lion, PA. A Service to Honor and Praise Millie will begin at 10 AM on Wed. at the church. Her pastor, Tina M. Melusky , assisted by Millie's son, Pastor Courtland D. Howard. Burial will be in Susquehanna Memorial Gardens. In Lieu of flowers, contributions may be offered to:Grace Lutheran Church, 220 N. Charles St., Red Lion, PA 17356. Millie and Donald celebrated 63 years of marriage together. Millie was a wonderful Mother and grandmother who loved to sit quietly and read a book, knit and do crafts. She enjoyed visits to the seashore and her time spent living at Country Meadows.

Mildred "Millie" G. (Gulden) Howard, formerly of Windsor entered into eternal rest on Wed., Feb. 24th at 3:40 pm at Manor Care North at the age of 89. She was married to the late Donald L. Howard, Sr. whom entered into rest on Aug. 23, 2011. Millie... View Obituary & Service Information

The family of Mildred "Millie" G. Howard created this Life Tributes page to make it easy to share your memories.