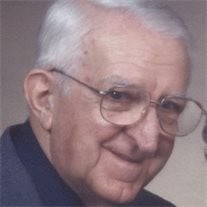 RED LION Milton D. 'Dale' Shaull, 86, entered into rest after a lengthy illness on Monday, October 25, 2010, at 2:35 a.m. at his residence. He was the husband of Clara E. (Miller) Shaull, who entered into rest on October 16, 2001. Born in Red Lion on September 16, 1924, he was the son of the late Milton T. and Molly I. (Workinger) Shaull. He was a lifetime member of St. James Lutheran Church and a United States Army Veteran serving during WWII. He was a turck driver for 27 years with Warner's Dairy and retired from PA &S Smalls in 1989, after 15 years of service. Survivors include two sons, Kenneth D. Shaull of Brogue and wife, Julia, and Thomas M. Shaull of Dallastown; one daughter, C. Elaine Barnett of Red Lion and husband, Alan; three grandchildren; four great-grandchildren; one brother, Marlin Shaull of Felton; four sisters, Gail Smith of York, Rachel Shaull of York, Mary Tyson of Felton and Ruth Ann Burke of Felton. There will be no viewing. Burg Funeral Home, Inc., 134 W. Broadway, Red Lion will be handling the arrangements. There will be a graveside service 10 a.m. Thursday. Family and friends are invited to extend their condolences at 9:45 a.m. at St. James Lutheran Cemetery. The Rev. Daniel R. Moore of Guinston Presbyterian Church will officiate. Contributions may be offered to York VNA Hospice- 504 S. George St., York, PA 17403. Memorial condolences can be made at www.BurgFuneralHome.com

The family of Milton Dale Shaull created this Life Tributes page to make it easy to share your memories.

Send flowers to the Shaull family.