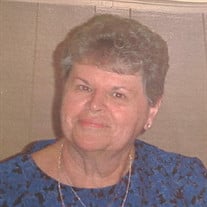 Miriam Eloise (Reichard) Beaverson, of Red Lion, went from life to Life Eternal, on Saturday, June 29, 2019, at 12:10 am, with family by her side, at Manor Care South, at the age of 82. She was the wife of the late Robert L. Beaverson who entered into rest on September 25, 1989. Miriam was born in York, on August 24, 1936 and was the daughter of the late Phillip D. and T. Romaine (Collins) Reichard. She was a self-employed beautician, of Miriam Beaverson’s Salon in Red Lion for 33 years, and also worked at Wisehaven, in the Banquet Hall, then at Christ Lutheran Church Day Care in Dallastown, in the infant room for 14 years prior to her retirement. Miriam was a longtime member of St. Paul’s United Methodist Church in Red Lion. She enjoyed traveling to the family cabin in Potter County, caring for children, especially her grandchildren. She leaves her four children, Gregory A. Craley and wife Debra of Red Lion, Gwendolyn A. Barshinger and husband William of Dallastown, Lana E. Hoffman and husband Joel of Red Lion and Stacie L. Achenbach and husband Ethan of Red Lion. She was the loving grandmother of nine grandchildren, Brad Craley and wife Brenda of Ohio, Jason Craley and wife Lindsey of Red Lion, Scott Beinhower and wife Rachelle of York, Michelle Addison and husband Kris of Georgia, Tim Barshinger , Tony Barshinger and wife Stephanie, all of Red Lion, Courtney Scott and husband Jeremy, Ashley Gilbert and husband Eli, all of York and Tiffany Kauffman of Red Lion, and was the great grandmother of 16 great grandchildren, Aidan, Quinn, Kolbie, Payton, Julian, Benny, Jax, Violet, Will, Kylee, Madilyn, Brady, Landon, Amanda, Lily, and Zander. She has a sister in law, Joan Reichard of Red Lion and nieces and nephews. She was preceded in death by her brother, Robert Reichard and her step sister, Karen Reichard. There will be no viewing. Visitation will be on Tuesday, July 2nd, from 9-11 am at Burg Funeral Home, Inc., 134 W. Broadway, Red Lion. A Service of Honor and Praise for Miriam will begin at 11 am at the funeral home, with Rev. Stephany S. Sechrist, retired United Methodist pastor, officiating. Burial will follow the service at Windsor Cemetery. In lieu of flowers, contributions may be offered to: Alzheimer’s Association, 2595 Interstate Drive, Ste. 100, Harrisburg, PA 17110. Miriam was a very loving mother, grandmother and great grandmother and will be greatly missed by all who knew and loved her. www.BurgFuneralHome.com

Miriam Eloise (Reichard) Beaverson, of Red Lion, went from life to Life Eternal, on Saturday, June 29, 2019, at 12:10 am, with family by her side, at Manor Care South, at the age of 82. She was the wife of the late Robert L. Beaverson who entered... View Obituary & Service Information

The family of Miriam Eloise (Reichard) Beaverson created this Life Tributes page to make it easy to share your memories.

Send flowers to the Beaverson family.