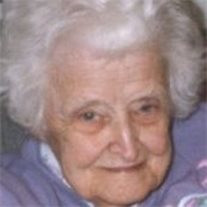 DALLASTOWN Miriam L. (Anderson) Roseman, 89, entered into rest after a brief illness at 4:56 a.m. Thursday, March 17, 2011, at York Hospital. She was the wife of Guy B. Roseman, who entered into rest on January 22, 1972. She was born in Winterstown, on May 6, 1921, and was the daughter of the late John W. and Addie (Zellers) Anderson. She and her late husband owned and operated the former Roseman's AG Store in Winterstown from 1946 to 1966. Miriam was also the secretary at Christ Lutheran Church in Dallastown from 1972 until she retired in 1988. She was a graduate of Red Lion High School Class of 1939 and then graduated from Prowell's Business School in 1941. She was a longtime and faithful member of Winterstown United Methodist Church, where she taught Sunday School and Ladies Bible Study for many years. Surviving are two daughters, Charlene F. Emenheiser of Winterstown and husband, Greg, and Faye M. Kinard of Winterstown and husband, Monte; six grandchildren, Brian Emenheiser (Kelly), Holly Taylor (Matt), Kari Kinard, Courtney Heesacker ( Tyson), Kendra Kinard, and Kyle Kinard; one stepgranddaughter, Deborah Keener (Steve); four great-grandchildren, Ashley, Megan, Ryan, and Cameron; and several nieces and nephews. She was preceded in death by two great-grandchildren, Kristy and Scott Emenheiser; one brother, J. Wilbur Anderson; and two sisters, Grace O. Snyder and her twin sister, Mildred L. Sentz. Viewings will be held Sunday, March 20, from 7 to 9 p.m. at Burg Funeral Home, Inc., 134 W. Broadway, Red Lion, and Monday from 9 to 10 a.m. at Winterstown U.M. Church, 12184 Winterstown Road, Felton. The service will begin at 10 a.m. Monday at the church with her pastor, the Rev. Logan G. Swanger, OSl officiating. Burial will be at Winterstown Evangelical Cemetery. In lieu of flowers, contributions may be offered to Winterstown U.M. Church Building Fund, 12184 Winterstown Road, Felton, PA 17322.

DALLASTOWN Miriam L. (Anderson) Roseman, 89, entered into rest after a brief illness at 4:56 a.m. Thursday, March 17, 2011, at York Hospital. She was the wife of Guy B. Roseman, who entered into rest on January 22, 1972. She was born in Winterstown,... View Obituary & Service Information

The family of Miriam A. Roseman created this Life Tributes page to make it easy to share your memories.

Send flowers to the Roseman family.