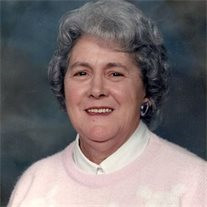 Colleen L. (Mitzel) Bankert of Winterstown, went home to be with her Lord and Savior, surrounded by her family on Friday, September 27, 2013, at 8:17 p.m. at Manor Care Dallastown at the age of 83. She was the wife of the late Preston L. Bankert who entered into rest on April 14, 1994, and was the companion of Leon "Jake" Geesey of Winterstown. She was born on March 31, 1930, in Felton, the daughter of the late Lively and Dorothy (Weitkamp) Mitzel. Colleen worked at Topflight Tape Company, West Side/Memorial Hospital, Barley Nursing Home, and then York Hospital, where she worked in housekeeping and radiology, retiring from there in 1992. She also worked for the Winterstown Borough as Secretary/Treasurer for 26 years, retiring in 2006. She was an active lifetime member of St. Paul (Lebanon) Lutheran Church in Felton where she served the church in many capacities, a member of the Potosi Farm Women Group #11, a founder/organizational leader for the Winterstown-Felton 4-H Club for 25 years, an elderly caregiver, and helped her late husband on the Winterstown family farm. She was a Red Lion graduate of the class of 1948 and attended Hake's School in Felton. Colleen is survived by her companion, "Jake" Geesey of Red Lion; 4 children, Michael G. Bankert and his wife Joyce (Mann) of Red Lion, Vickie L. Bankert of Dallastown, Wayne E. Bankert of Red Lion and his wife Sue (Herbst), and Michele L. (Bankert) Grove of Felton and her husband William; 9 grandchildren, Drew Bankert and wife Amanda of Elizabeth, Colo., Emily (Bankert) Russell and husband Joseph of Felton, Eric Bankert and fiance' Kayla of Dallastown, Heather (Bankert) Stem and husband Timothy of Red Lion, Kelly Jo (Bankert) McCulloch and husband Joshua of Newville, Brandy (Bankert) Bailey and husband Joshua of Felton, and Mitchell and Marshall Grove, both of Felton; ten great-grandchildren, Reid and Maysen, Joseph, Pierce and Kinley, Delana and Taryn, Louella and Andrew, and Lyla; a brother, Stewart Mitzel and Avis of Venice, Fla.; 3 brothers-in -law, D. Leon and wife Joyce of Spring Grove, Dennis Bankert of York, and Jan Bankert and wife Jean of York; a sister-in-law, Judy Richardson of York; and several nieces and nephews. She was preceded in death by a granddaughter, Amanda Kate Bankert (1985) and a brother, David F. Mitzel (1932-1935). Viewings will be Wednesday, October 2 from 7 to 9 p.m. at Burg Funeral Home, Inc., 134 W. Broadway, Red Lion, and Thursday Oct. 3 from 1 to 2 p.m. at St. Paul (Lebanon) Lutheran Church, 6955 Rippling Run Road, Felton. The funeral service will be on Thursday at 2 p.m. at the church, with the Rev. Brenda J. Ferree of St. James Evangelical Lutheran Church in York and the Rev. Donald J. Costlow of St. Paul (Lebanon) Lutheran officiating. Burial will be in Lebanon Lutheran Cemetery. In lieu of flowers, contributions may be offered to St. Paul (Lebanon) Lutheran Church, 6955 Rippling Run Road, Felton, PA 17322; or to 4-H Futures Fund, 112 Pleasant Acres Road, York, PA 17402. Colleen was an amazing mother, grandmother, companion and friend to many. She loved spending time with her family, especially her two youngest grandsons after her retirement. She and Jake would travel, go on cruises and reside in Webster, Fla. during the winter months. The family would like to extend a heartfelt "thank you" to the staff of Manor Care Dallastown and the Quality Care/White Rose drivers for the compassionate care that Colleen and the family received during her illness and passing. She will be greatly missed by all who knew and loved her. On line condolences may be offered at www.BurgFuneralHome.com

Colleen L. (Mitzel) Bankert of Winterstown, went home to be with her Lord and Savior, surrounded by her family on Friday, September 27, 2013, at 8:17 p.m. at Manor Care Dallastown at the age of 83. She was the wife of the late Preston L. Bankert... View Obituary & Service Information

The family of Colleen L. (Mitzel) Bankert created this Life Tributes page to make it easy to share your memories.

Colleen L. (Mitzel) Bankert of Winterstown, went home to be with...