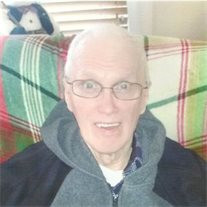 Myron "Doug" D. Gardner, 71, entered into eternal rest after a brief illness at 6:10 a.m. on Wednesday, October 23, 2013 at Manor Care Dallastown. He was the husband of Shirley A. (Thompson) Gardner who he married on June 30, 1962. He was born in Auburn, N.Y. on May 11, 1942, the son of the late Floyd B. and Jean L. (Snyder) Gardner. Myron was a factory worker and a lifetime member of the Collinsville Fish and Game. In addition to his wife, Shirley; he is survived by a daughter, Tina M. Shaw and husband Keith of Brogue; a granddaughter, Brandynn C. Shaw of York; two sisters, Susan Lee of Bedford County, and Mary Gardner of New Mexico; and numerous nieces and nephews. There will be a viewing on Monday, October 28, 2013, from 9 to 10 a.m. at Burg Funeral Home, Inc., 134 W. Broadway, Red Lion. A Service of Honor and Praise for Myron will be on Monday at 10 a.m. at the funeral home, with the Rev. David D. Tietje, pastor of St. John's United Church of Christ, Red Lion, officiating. Burial will be in Susquehanna Memorial Gardens. In lieu of flowers, contributions may be offered to: Collinsville Fish and Game, 12660 Collinsville Rd, Brogue, PA 17309. Myron was a wonderful husband to Shirley for 51 years. He enjoyed hunting and playing the Dobro, but most of all camping and going to Bluegrass Festivals with his wife. He was a loving father and grandfather and will be sadly missed by all who knew and loved him Online condolences may be made at www.burgfuneralhome.com

The family of Myron "Doug" D. Gardner created this Life Tributes page to make it easy to share your memories.