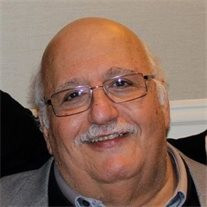 Nabil M. Homsy died on Friday, Dec. 26 at 7:28 a.m. at York Hospital at the age of 71, with his family by his side. He was the husband of Carol J. (Warner) Homsy of Red Lion, to whom he married on October 14, 1994, celebrating 20 years together. He was born in Cairo, Egypt on May 11, 1943, and was the son of the late Manuel S. and Mireille Z. (Salama) Homsy. Nabil started his career as a chemistry teacher, then worked at IBM in Canada as a Staff Engineer. At Die-Tech in York Haven, he established a micro-electronics assembly division prior to becoming self-employed, operating First Level, Inc. in Emigsville. He attended both St. Joseph's and St. Patrick's Catholic Church in York. Surviving, besides his wife, Carol, are a son, Alain E. Homsy of Norway; a daughter, Marie-Josèe Homsy of Ottawa, Ontario, Canada; a stepdaughter, Maria Rivera-Heisler (Daniel) of Red Lion; and a stepson, Jake Rivera (Tammy) of Parkton, Md.; six grandchildren, Veronica, Felicia, Mason, Gabriel, Julian and Jacob; two great-grandchildren, Amari and Arianni; a brother, Nagi Homsy of Montreal, Quebec, Canada; and a sister, Rosemarie Surguy of Ottawa, Canada; nieces and nephews; great nieces and nephews; cousins; and numerous extended family. A viewing will be held Wed., Dec. 31 from noon to 1 p.m. at St. Joseph's Catholic Church, 251 E. Main St., Dallastown. Burg Funeral Home, Inc., 134 W. Broadway, Red Lion, will be assisting the family with the arrangements. A Mass of Christian Burial will begin at 1 p.m. at the church. Father John McCloskey will officiate. Burial will be in Windsor Cemetery In lieu of flowers, contributions may be offered to Norwegian Refugee Counsel at www.NRC.NO. Nabil was a great husband, father and grandfather. He loved his beloved Italian Greyhounds, Carly, Zippy and Suzy. He was a very kind and wise man and faithful to his Lord and Savior. Online condolences may be offered at www.BurgFuneralHome.com

The family of Nabil M. Homsy created this Life Tributes page to make it easy to share your memories.

Send flowers to the Homsy family.