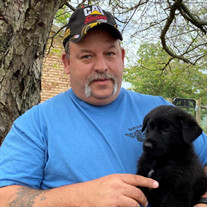 Neil W. Coeyman, of Wrightsville, entered into rest on Friday, September 24, 2021 at 8:54 AM at Wellspan York Hospital at the age of 50. Neil was the husband of Tina M. (Hake) Coeyman, to whom he married on July 2, 1997, sharing 24 years of marriage. Neil was born in York on April 6, 1971 and was the son of Valerie J. (Barley) Rosenzweig and stepson of Harry W. Koontz, both of Red Lion and the son of the late Edward S. Coeyman. He was a truck driver for A&S Kinard Trucking where he worked for 15 years. Neil was an Auxiliary Member of the Red Lion VFW Post #1446 and also the Red Lion American Legion Post #543. He enjoyed riding his Harley, NASCAR racing, fishing, canning vegetables from his garden and rebuilding his wheel horse tractors which he loved. Though never in the military, his father was in the Army, therefore, Neil was very patriotic, supporting his country and those who serve or have served for our freedoms. Neil was a man of God and a good Christian, who enjoyed reading his bible regularly. He was a jokester, always making others laugh. He will truly be missed. Neil was a member of New Covenant Community Church where he was baptized on April 25, 2021. He was an active volunteer within his church and dedicated his time as it was needed. Besides his wife, Neil leaves his daughter, Cheyenne C. Garrett and husband, Chauncey, of East Berlin, son, Derek L. Stiles and wife, Alison, of Mt. Wolf and his two grandchildren, Paisley Garrett and Kara Mundis, his brother, Edward “Sam” Coeyman, Jr. of Windsor, his uncle, Bryan Rhodes and wife, Lori, of York, his Aunt Catherine and Uncle Burnell Rholand of Seven Valleys and Aunt Darlene Rider and husband, Sheldon, of Red Lion, his five stepsisters and two step brothers, as well as numerous nieces and nephews. He also leaves behind his sister in laws, Debra Smeltzer and husband, Todd, of Red Lion, Tammy McHugh and husband, William, of Red Lion, brother in law, Michael Hake and wife, Vickie, of Windsor, mother in law, Evelyn Hake of Windsor and his German Shepherds, Ruby and Jeb. Neil was preceded in death by his father in law, Roy Elwood Hake, Jr., who entered into rest on June 25, 2021. A viewing for Neil will be on Friday, October 1, 2021 from 1-2 PM at Burg Funeral Home, Inc., 134 W. Broadway. A Service of Honor and Praise will begin at 2 PM with his Pastor, Rodney E. Anderson, officiating. Burial will take place at Salem Community Cemetery. The family requests that if possible, anyone in attendance dress casually and wear a Harley T-shirt, if possible. Contributions in memory of Neil may be offered to his church: New Covenant Community Church, 284 Slab Road, Delta, PA 17314.

The family of Neil W. Coeyman created this Life Tributes page to make it easy to share your memories.

Neil W. Coeyman, of Wrightsville, entered into rest on Friday,...

Send flowers to the Coeyman family.