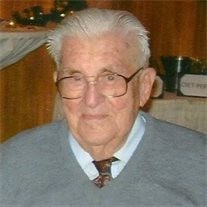 Nevin "Nev" T. Koons entered into eternal rest unexpectedly on Wed., April 9, 2014, at 4:30 a.m. at Manor Care North at the age of 98. He was the husband of the late Faye A. (Gibson) Koons who entered into rest on Sept. 17, 2013. Nevin was born in Red Lion on June 8, 1915, and was the son of the late Charles F. and Alsetta A. (Tome) Koons. He worked at the York Naval Ordinance Plant, then went to the Red Lion Cabinet Factory where he worked for many years. Nevin then became owner and operator of the former Koons Grocery in Red Lion and he also was the owner of a saw mill. He retired in 1970, at which time he was the owner of a trailer park in Windsor. He was a member of the St. Paul's UM Church in Red Lion, where he was very active for more than 50 years and was part of the United Methodist Men. Nevin is survived by two sons, Rodger D. Koons and wife Delores of York and Rodney D. Koons and wife Shirlee of Jackson Spring, N.C.; five grandchildren, Mark Koons, Scott Koons, Sandra Koons, Brian Koons and Kevin Koons; nine great-grandchildren, Holden, Cameron, Hayden, Samuel, Benton, Regan, Bryce, Hunter and Colton. He was preceded in death by four brothers, Russell Koons, Gene L. Koons, Charles H. Koons and Kenneth E. Koons; and a sister, Margaret Hoff. There will be no viewing. Cremation will take place with Burg Funeral Home, Inc., 134 W. Broadway, Red Lion. A Graveside Service of Honor and Praise for Nevin will be on Sat., April 12 at Red Lion Cemetery. Family and Friends are invited to extend their condolences at 9:45 a.m., with the service to begin at 10 a.m. at the cemetery. His pastor, the Rev. Lenore C. Hosier will officiate. In lieu of flowers, contributions may be offered to St. Paul's United Methodist Church, 45 1st Avenue, Red Lion, PA 17356. Nevin was a wonderful Dad to his two sons and grandfather to his many grandchildren. He was a sports fan but loved the Baltimore Orioles team. He enjoyed shooting pool and listening to country music. "My life's been full, I savored much, good friends, good times, a loved one's touch. Lift up your hearts and share with me, God wanted me now, He set me free." Online condolences may be offered at www.BurgFuneralHome.com

The family of Nevin "Nev" T. Koons created this Life Tributes page to make it easy to share your memories.