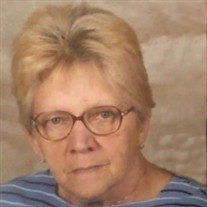 Norma J. (McSherry) Bair, of Windsor, went from life to Life Eternal on Sunday, July 5, 2020, at 9:15 am at UPMC Pinnacle Hospital at the age of 85. She leaves her significant other, Charles Long of Windsor and was the wife of the late Preston L. Bair who entered into rest on July 2, 1985. She was born in Lower Windsor Township on December 25, 1934 and was the daughter of the late Lloyd and Minnie (Koontz) McSherry. She worked for the former Rowanna Girl in Hellam in the cutting department, retiring after many years of service, after they went out of business. She was very good at sewing and was very dedicated to everything she did. She not only sewed clothing, but she was able to reupholster furniture and had many other talents with sewing. Her children and grandchildren were her world and spending time with them was important to her. She leaves her daughter, Debra A. Marion and her husband David of Airville, and her son, Shane R. Bair and his wife Kathy of Windsor. She was the loving grandmother of nine grandchildren; Jennifer Livelsberger (Chris) of Wrightsville, Jessica Kline (Andy Jarboe) of York, Courtney Blackburn (Jay) of Jarrettsville, MD, Joseph Marion (Liz) of VA, Scott Marion of OK, Douglas Marion of Harrisburg, Rebeckah Bair of Hellam, Shane R. Bair II (Layla) of N. Wales, Philadelphia, and Heather Bair of Norristown, and six great grandchildren; Madison, Emma, Melody, Flynn, Lily and Camden, with another one due at any time. She also has a niece. She was preceded in death by a son, Keith W. Bair in August 4,2013, and by her only sister, Odessa Dosch. Family and friends are invited to her viewing on Monday, July 13th, from noon to 12:30 pm, at Burg Funeral Home, Inc., 134 W. Broadway, Red Lion. A Service of Honor and Praise for Norma will begin at 12:30 pm with Rev. David D. Tietje, pastor of St. John’s United Church of Christ in Red Lion, officiating. Burial will follow the service at Susquehanna Memorial Gardens. In lieu of flowers, contributions may be offered to: York Health Foundation, 50 North Duke Street, Second Floor, York, PA 17401.

Norma J. (McSherry) Bair, of Windsor, went from life to Life Eternal on Sunday, July 5, 2020, at 9:15 am at UPMC Pinnacle Hospital at the age of 85. She leaves her significant other, Charles Long of Windsor and was the wife of the late Preston... View Obituary & Service Information

The family of Norma J. (McSherry) Bair created this Life Tributes page to make it easy to share your memories.

Send flowers to the Bair family.