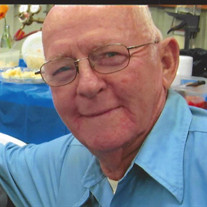 Palmer C. Saylor, of York, went home to his Lord and Savior and to be with his beloved, Mary J. (Seitz) Saylor, who entered into rest on September 5, 2016, with whom he enjoyed 64 years of marriage. He was born in York on January 25, 1934 and was the son of the late Howard Nelson and Helen Kathryn (Hershey) Saylor. Palmer was a truck driver for R & T Mobile Homes in Akron, transporting and assisting setting the homes in place. He was a member of the Hawkes Gunning Club, The Veterans of Foreign Wars Post #7045, Hellam, Vikings Club, and the Yorkana Fire Company. He was also a member of Shiloh God’s Missionary Church. He has two sons to cherish his memory, William E. Saylor and his wife Lisa of Windsor, and Rodney A. Saylor and his wife Susan of York. He was the loving grandfather of six grandchildren, Beth Turnbaugh, Judy Carpenter, Brianna Saylor, Sean Saylor, James Saylor, Eric Saylor and great grandfather to seven great grandchildren, Justin Saylor, Kody Carpenter, Candice Carpenter, Jeffrey Scott, Darryl Jones, Tristan Saylor, and Lauren Saylor. Palmer was one of ten children, with three sisters surviving him, Diane Watson of MD, Cindy Klopp of York and Kathryn Grove of York, along with numerous nieces and nephews. He was preceded in death by a grandson, Gerry Saylor in 1986 and his siblings, Nelson Saylor, Dean Saylor, Kermit Saylor, Alma Hemphill, Bernice Markel and Lucreta Markel. Viewing for Palmer will be on Wednesday, Oct. 9th, from 7-9 pm and Thursday, Oct. 10th, from 9:30 to 10:30 am at Burg Funeral Home, Inc., 134 W. Broadway, Red Lion. A Service of Honor and Praise for Palmer will begin at 10:30 am at the funeral home, with Pastor Donald Alspaugh of Life Point York Church will be officiating. Burial will be at Susquehanna Memorial Gardens. Palmer’s family was very important to him and he loved spending time with them. His dream was to travel across the United States with his grandson, Justin. Be not burdened with times of sorrow. I wish for you the sunshine of tomorrow. My life’s been full, I savored much, good friends, good times, and loved one’s touch. In lieu of flowers, contributions may be offered to: York Health Foundation, Cancer Patient Help Fund, 50 N. Duke Street, 2nd Floor, York, PA 17401. www.BurgFuneralHome.com

Palmer C. Saylor, of York, went home to his Lord and Savior and to be with his beloved, Mary J. (Seitz) Saylor, who entered into rest on September 5, 2016, with whom he enjoyed 64 years of marriage. He was born in York on January 25, 1934 and... View Obituary & Service Information

The family of Palmer C. Saylor created this Life Tributes page to make it easy to share your memories.

Palmer C. Saylor, of York, went home to his Lord and Savior and...

Send flowers to the Saylor family.