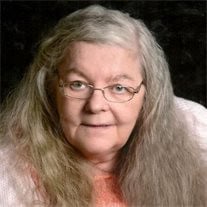 Pamela M. (Hivner) Bisker entered into eternal rest after a brief illness on Monday, April 4 at 5 a.m. at her residence at the age of 66. She was the wife of Charles J. Bisker of Windsor.Pam was born in York on August 3, 1949, and was the daughter of the late Donald Eugene and Marcelene Mae (Shoff) Hivner. Pam was a graduate of Red Lion High School and continued her education, receiving a two year associate degree as an LPN. She worked in various nursing homes in the Dementia Units and also was a charge nurse. She was a member of Red Lion Bible Church and York Archers. Surviving besides her husband, Charles, are two children, Kimberly J. Grove and her companion Douglas K. Druck, both of Manchester, and Marc D. Portner of Windsor; five stepchildren, Scotty G. Bisker and wife Edith of Licking, Mo., Sarah P. Nieburuegge and husband Leonard of Plato, Mo., Jason A. Bisker and his spouse Aaron Criss, both of Mechanicsburg, Joseph N. Bisker and wife Jennifer of Wrightsville, and Jessie G. Bisker and wife Jen of Spry; 15 grandchildren; two great-grandchildren; two great-grandchildren due in May and September; and four cousins. She was preceded in death by a granddaughter, Eden Bisker; two aunts, Elaine (Hivner) Oberlander and Florene (Shoff) Wallace. A viewing will be held Friday, April 8 from 10 to 11 a.m. at Burg Funeral Home, Inc., 134 W. Broadway, Red Lion, The Service of Honor and Praise for Pamela will begin at 11 a.m. at the funeral home, with her pastor, the Rev. Steven A. Schmuck, officiating. Burial will be in Windsor Cemetery. In lieu of flowers, contributions may be offered to York Health Foundation, Cancer Patient Help Fund, 50 N. Duke St., Second Floor, York, PA 17401. Pamela was a wonderful wife, mother and grandmother who loved spending time with her family and her three dogs. She enjoyed hunting, fishing and received awards at the York Archers Club. She was active in the Scouts, serving as a leader in the Red Lion Scout Pack. She enjoyed crafts and drawing and painting. She was an artist and was very talented with freestyle drawing. A fighter with a strong will, Pamela was a two-time cancer survivor. We will miss her dearly.

Pamela M. (Hivner) Bisker entered into eternal rest after a brief illness on Monday, April 4 at 5 a.m. at her residence at the age of 66. She was the wife of Charles J. Bisker of Windsor.Pam was born in York on August 3, 1949, and was the... View Obituary & Service Information

The family of Pamela M. (Hivner) Bisker created this Life Tributes page to make it easy to share your memories.