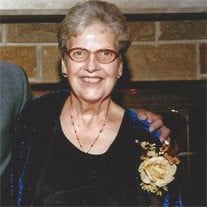 Patricia J. (Gohn) Shaull, of Brogue, passed away peacefully at her home on Friday, June 9, 2017 at 10:46 PM with family by her side at the age of 81. She was the loving wife of Charles E. Shaull to whom she married on March 24, 1951 (at the age of 15), celebrating 66 great years together. She was born in Springvale on February 2, 1936 and was the daughter of the late Walter R. and Ruth A. (Koontz) Gohn. She attended Springvale UM Church as a child and was a lifetime member of St. James the Apostle Evangelical Lutheran Church in Brogue, where she, in earlier years sang in the Choir, taught Sunday School, helped with the church Clothes Closet, and was a member of WELCA. She was employed by the Brogue Cigar factory, Collinsville Discount Center and for Flinchbaugh products of Red Lion. She was a homemaker and worked side by side with her husband on their farm. She enjoyed her family, her grandchildren, friends, singing (old gospel & hymns of praise), going to church, cooking, making crafts, crocheting, sports, fishing (especially for flounder) and was an avid Baltimore Orioles fan. In addition to her husband, Charles, she is survived by her four children, Gloria A. Shaull and her husband Michael W. of Brogue, ,Gerald E. Shaull and his wife Christine of Red Lion, Michael C. Shaull and his wife Dorinda of Airville and Timothy R. Shaull and his wife Shirley of Seven Valleys. She had ten grandchildren, 18 great grandchildren and 5 great great grandchildren. She has two brothers, Spencer Gohn and James Gohn both of Red Lion and a sister, Gladys (Peggy) Stoltzfus of Dallastown. A brother in law, Harold (Hops) Shaull of Brogue and numerous nieces and nephews. She was preceded in death by her ten siblings, Donald Gohn, Walter Robert Gohn, Marion Leader, Oda Keener, Ned Gohn, Edward Gohn, Barry Gohn, Earl Gohn, Ruth L. Gohn and Charles William Gohn (stillborn), and a sister in law, Julia R. Shaull. Viewing will be on Wednesday, June 14, 2017 from 9-11 am at St. James the Apostle Evangelical Lutheran Church, 2335 Cramer Road, Brogue. A Service of Honor and Praise for Patricia will begin at 11 am on Wed. at the church with her pastor, Rev. Kathleen A. Kuehl officiating. Burial will follow at St. James Lutheran Cemetery. Burg Funeral Home, Inc., 134 W. Broadway, Red Lion will be assisting the family with the arrangements. Patricia was a wonderful wife, mother and grandmother who loved her family and spending time with them. She was a lover of life. Her family would like to extend a very big, heartfelt thank you to her caregivers, Nadine Decker, Joyce Colyer and Amanda Bennett and to Dr. Carl Brango and Staff, for all they did for Patricia and for the compassion shown to them during this difficult time. In lieu of flowers, contributions may be offered in Patricia's memory to St. James the Apostle Evangelical Church, 2335 Cramer Road, Brogue, PA 17309. On line condolences may be offered at www.BurgFuneralHome.com

The family of Patricia J. (Gohn) Shaull created this Life Tributes page to make it easy to share your memories.