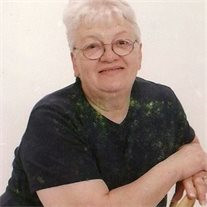 Patricia A. (Zartman) Zumbrum, 71, died on Wednesday, October 9, 2013, at 2:55 a.m. at York Hospital. She was the wife of Gorman L. "Butch" Zumbrum. Being the love of his life, they had celebrated their 53rd wedding anniversary on March 7, 2013. There will be no viewing. Following cremation, burial will be at the convenience of the family in Mount Rose Cemetery. Service of Remembrance provided by Burg Funeral Home, Inc. 134 West Broadway, Red Lion. Mrs. Zumbrum, a sander with Keystone Wood Specialties, was born May 26, 1942, in York and was the daughter of the late John A. and Evelyn (Schrum) Zartman. She is survived by her husband; five daughters, Christine Croucher of Dover, Tammy Miller of Glen Rock, Dawn Burg of Felton, Judith Lehman and Tiffany Eichelberger both of Airville; eight grandchildren; five great-grandchildren; and Mama's baby dog, Rascal. She was preceded in death by a sister, Carolyn Kearney. Family requests no flowers. Memorial contributions may be made to McKendree UM Church, 3708 Delta Rd., Airville, PA 17302 or to the York County SPCA, 3159 N. Susquehanna Trail, York, PA 17406. Butch and Pat had been companions since they were 15 years old and she became his life. Pat was a devoted mother and grandmother to both grandchildren and granddogs.

The family of Patricia A. Zumbrum created this Life Tributes page to make it easy to share your memories.

Send flowers to the Zumbrum family.