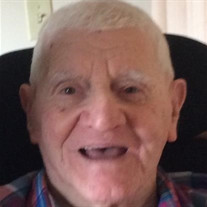 Paul Robert Hannigan, formerly of Snyder Corner Road, Red Lion, went home to be with his Lord and Savior, on Monday, August 19, 2019 at 7:45 am at Normandie Ridge at the age of 97. He was the husband of Amaryllis Sangrey (Jones) Hannigan of Dallastown, to whom he married on March 31, 1950, celebrating 69 years together. Paul was born in Chanceford Township on October 12, 1921, and was the son of the late Walter Beatty and Annie Rebecca (Shaull) Hannigan. He was a farmer, but had also worked at the former York County Chair Company in Red Lion and T.R. Taylor Furniture Factory in York. He enjoyed refinishing furniture, which he would do for the former Zarfoss furniture store and for others. Paul was a longtime and very active member of St. Luke Lutheran Church in Felton, where he was a Sunday School teacher, past president of the church council, treasurer and he assisted in planning the annual church picnic. He was a member of the Red Lion Veterans of Foreign Wars, Post 1446, and spending time with his family was very important to him. Paul was a WWII United States Army Veteran, serving in the Asiatic Pacific, receiving two bronze stars. Paul spent the last three years living at Normandie Ridge, where he was loved and given great care. His family extends a very special thank you to all the staff for their kindness, compassion and caring ways. Besides his wife Amaryllis, Paul is survived by his son, Ryan Robert Hannigan and his wife Kim of Mechanicsburg. He was the loving grandfather of six grandchildren, Jesse Hannigan and his wife Jordan of Wayne, PA, Matthew Hannigan and his wife Alyssa of Lancaster, Sarah Hannigan of Mechanicsburg, Michael Hannigan and his wife Heather of Red Lion, Heather Hannigan and her companion, Kelly Mizelle of Harrisburg, and Alyssa Hannigan of Carmichael, CA., and four great grandchildren, Jane Hannigan, Bailey and Noah Hannigan and Finn William Mizelle. Paul was one of nine children; he leaves two brothers, Lloyd Hannigan of Brogue and Earl Hannigan of Windsor, a sister, Reba Hannigan of Red Lion, along with numerous nieces and nephews. He was preceded in death by his son, Ryan’s twin brother, Duane Paul Hannigan, who entered into rest on August 16, 2019, a grandson, Shawn Paul Hannigan in January of 1987, and his five siblings, John, Dale, Melvin, Walter, Jr. and Ruth (twin sister to Reba) Hannigan. Cremation will take place with Burg Funeral Home, Inc., 134 W. Broadway, Red Lion. A Graveside Service to Honor and Praise Paul’s life will be held on Saturday, September 21, 2019, at 1:30 PM, at St. Luke Lutheran Cemetery in Felton, Rt. 425, 1 mile South of New Bridgeville. Rev. Rodney Lilley, pastor of Christ Lutheran Church in Bellegrove, PA, and close friend, will officiate. Full military rites will be offered by the York County Veterans Honor Guard. Please meet at the cemetery just prior to the start of the service. In lieu of flowers, contributions may be offered to: St. Luke Lutheran Church, 2666 Furnace Road, Felton, PA 17322.

Paul Robert Hannigan, formerly of Snyder Corner Road, Red Lion, went home to be with his Lord and Savior, on Monday, August 19, 2019 at 7:45 am at Normandie Ridge at the age of 97. He was the husband of Amaryllis Sangrey (Jones) Hannigan of... View Obituary & Service Information

The family of Paul Robert Hannigan created this Life Tributes page to make it easy to share your memories.

Send flowers to the Hannigan family.