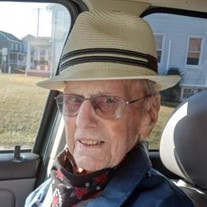 Paul M. “Barney” Dettinger, a lifelong resident of Yorkana, left this earthly life to begin his eternal life with his Lord and Savior on Monday, May 23, 2022 at 5:25 am from Wellspan York Hospital at the age of 94. He was the loving husband of June E. (Snyder) Dettinger, to whom he married on August 15, 1953, celebrating 71 years together. He was born in York on November 6, 1927 and was the son of the late Paul R. and Marian (Dietz) Dettinger. After graduating from York High school, he was drafted into the Navy. After being honorably discharged he went to work at the former York Telephone & Telegraph, now known as Verizon, which was his one an only job until he retired. Barney was an avid outdoorsman, a game hunter and had a passion for snowmobiling, which he did up until age 90. Barney enjoyed watching old westerns which he fondly referred to as “Duster’s, and listening to Big Band music. He and his wife were members of the Sue Haven Yacht Club in Essex, MD, where they had many friends, as they enjoyed taking their boat, fondly called “Lazy D’s” out for the day. He was a United States Navy Veteran, serving during WWII. He was an only child and besides his wife, June, he leaves many extended family, and friends to cherish his memory. Cremation will take place with Burg Funeral Home, Inc., 134 W. Broadway, Red Lion. Family and friends are invited to extend their condolences to Ruth on Thursday, May 26th, from 1-2 pm at the funeral home. A Memorial Service to Honor and Praise Barney’s life will begin at 2 pm with Rev. David D. Tietje, pastor of St. John’s United Church of Christ, Red Lion, officiating. Full military rites will be offered by the York County Veterans Honor Guard. Burial will be private and in Locust Grove Cemetery at the convenience of the family. Online condolences may be offered at: www.BurgFuneralHome.com.

Paul M. &#8220;Barney&#8221; Dettinger, a lifelong resident of Yorkana, left this earthly life to begin his eternal life with his Lord and Savior on Monday, May 23, 2022 at 5:25 am from Wellspan York Hospital at the age of 94. He was the loving... View Obituary & Service Information

The family of Paul M. "Barney" Dettinger created this Life Tributes page to make it easy to share your memories.

Send flowers to the Dettinger family.