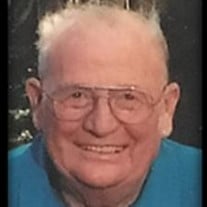 Paul Samuel Robinson, of Red Lion, went from life to Life Eternal on Saturday, February 23, 2019, after a lengthy illness, surrounded by his family, at 7:30 pm, at Wellspan York Hospital at the age of 86. He was the loving husband of Patricia A. (Shelley) Robinson of Red Lion to whom he married on August 5, 1950, celebrating 68 years of marriage. He was born in Chanceford Township on March 8, 1932, and was the son of the late Paul E. and Esther G. (Markel) Robinson. He worked at the former Guy Hobbs in Red Lion, working with wood and then went to Precision Components as an Assembler for many years prior to his retirement in 1995. He was a longtime member since 1950, of Bethel United Methodist Church in Brogue where he sang in the choir, served on the Administrative Board and was a former primary department Superintendent. Paul also was a member of the Southern York County Male Chorus, White Rose Square Dancing Club, New Bridgeville Fire Company and he played baseball for the Lucky Baseball team in the Susquehanna League. Besides his loving wife, Patricia, he leaves a daughter, Sandra K. Kingsley and her husband, William of Dallastown and a son, Terry L. Robinson and his wife Darla of Felton. He was the grandfather to Jenna Robinson of Berkley, CA and Jason Robinson of York. Paul leaves a brother, Ronald Robinson of Edmund, OK, along with several nieces and nephews. He was preceded in death by a brother, Richard Robinson. Viewing will be on Thursday, February 28th from 10-11 am at Bethel United Methodist Church, 1674 Furnace Road, Brogue. A Service of Honor and Praise for Paul will begin at 11 am at the church with his pastor, Rev. Kim Cartwright officiating. Burial will follow at the church cemetery. Burg Funeral Home, Inc., 134 W. Broadway, Red Lion will be assisting the family with the arrangements. In lieu of flowers, contributions may be offered to: Bethel UM Church, 1674 Furnace Road, Brogue, PA 17309. We did not know that day, that God would call your name. In life we loved you dearly; in death we do the same. You left us peaceful memories, your love is still our guide; and though we cannot see you, you are always at our side. Our family chain is broken, and nothing seems the same, but as God calls us one by one, the chain will link again.

Paul Samuel Robinson, of Red Lion, went from life to Life Eternal on Saturday, February 23, 2019, after a lengthy illness, surrounded by his family, at 7:30 pm, at Wellspan York Hospital at the age of 86. He was the loving husband of Patricia... View Obituary & Service Information

The family of Paul Samuel Robinson created this Life Tributes page to make it easy to share your memories.