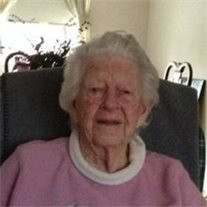 Pauline "Betty" F. (Anderson) Saxon, formerly of Red Lion, entered into eternal rest after a brief illness on Sunday, July 12, at 2:23 a.m. at SpiriTrust Lutheran, The Village at Shrewsbury, at the age of 97. She was the wife of Andrew J. Saxon who entered into rest on December 21, 1980. Betty was born in York on October 18, 1917 and was the daughter of the late Sherman and Blanche (Reynolds) Anderson. Betty was a homemaker and a longtime member of Grace Lutheran Church in Red Lion and was a former member of the Garden Club. Survivors include son, Rick A. Saxon of East Berlin and his wife, Robin; two daughters, Kathleen K. Saxon of Catonsville, Md. and Patricia A. Smallwood of York; five grandchildren, Chris Saxon of Arlington, Va., Melanie Saxon of Philipsburg, Pa., Nicole Saxon of East Berlin, Brian Smallwood of Wrightsville and Brenda Bair of N.C.; two great-grandchildren, Ashley and Brent; and a great-great-grandson, Jaxon; and brother, William Anderson of Lock Haven; nieces and nephews. She was preceded in death by her two brothers and two sisters. A viewing will be Thursday, July 16 from 9 to 10 a.m. at Burg Funeral Home, Inc., 134 W. Broadway, Red Lion. A service of Honor and Praise for Betty will begin at 10 a.m. on Thursday at the funeral home. The Rev. David D. Tietje, pastor of St. John's United Church of Christ in Red Lion will officiate. Burial will be in Red Lion Cemetery. In lieu of flowers, contributions may be offered to Grace Lutheran Church, 220 N. Charles St., Red Lion, PA 17356. Betty was a wonderful Mother and Grandmother. She was remembered as being a very strong and caring lady who enjoyed being with others, doing crafts, knitting and crocheting but her family was very important to her and they always came first in her life. She will be missed by all who knew and loved her. Online condolences may be offered at www.BurgFuneralHome.com

Pauline "Betty" F. (Anderson) Saxon, formerly of Red Lion, entered into eternal rest after a brief illness on Sunday, July 12, at 2:23 a.m. at SpiriTrust Lutheran, The Village at Shrewsbury, at the age of 97. She was the wife of Andrew J. Saxon... View Obituary & Service Information

The family of Pauline "Betty" F. (Anderson) Saxon created this Life Tributes page to make it easy to share your memories.