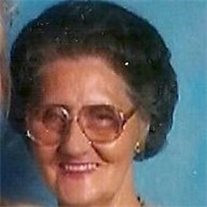 Pauline A. (Lentz) Blouse, 89, went home to be with her Lord and Savior after a brief illness on Tuesday, June 4, 2013, at 8:55 p.m. at her residence. She was the wife of Ray A. Blouse, who entered into rest on March 11, 1999. She was born in Dover, on September 2, 1923, the daughter of the late Martin O. and Anna (Dickey) Lentz. Pauline was a cigar maker working at the House of Windsor Cigar Factory for 30 years, then she worked at York Hospital in housekeeping retiring in 1980. She was a member of Shenberger's Chapel Church in New Bridgeville and she was very active in church community. Surviving are two sons, David R. Blouse and Gregory D. Blouse, both of New Bridgeville; a daughter, Denise C. Fisher of York; three grandchildren, Tammy Shultz (Roger III) of York, Brittany Shirk (Jason) of Lancaster and John A. Fisher, Jr. (Lisa) of Mt. Wolf; five great-grandchildren, Nic and Hank Shultz, Justin, Samantha and Miranda Fisher; two sisters, Dorothy Boyd of York and Madeline Knaub of Dallastown, a brother, Jack Lentz of Ohio; and several nieces and nephews. She was preceded in death by a son-in-law, John A. Fisher, Sr.; and six siblings. There will be a viewing from 9 to 10 a.m. Monday, June 10, 2013, at Burg Funeral Home, Inc., 134 W. Broadway, Red Lion. The service will follow at 10 a.m. with the Rev. David D. Tietje, pastor of St. John's United Church of Christ in Red Lion, officiating. Burial will be in Shenberger's Chapel cemetery in New Bridgeville. In lieu of flowers, contributions may be offered to: Hospice and Community Care, 685 Good Drive, P.O. Box 4125, Lancaster, PA 17604. Pauline was a wonderful Mother, Grandmother and Great Grandmother. Her family always came first in her life. She loved to cook and bake, travel and take bus trips. She will be greatly missed by all who knew and loved her. On line condolences may be made at www.BurgFuneralHome.com

The family of Pauline A. (Lentz) Blouse created this Life Tributes page to make it easy to share your memories.