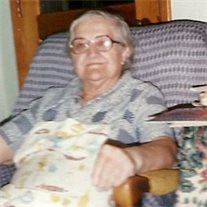 Pauline S. (Poff) Reichard, formerly of Wrighstville, entered into eternal rest after a lengthy illness at 12:10 a.m. Thursday, September 25, 2014, at Pleasant Acres Nursing Home. She was the wife of Junior B. Reichard, who entered into rest on September 12, 2004. She was born in Lower Windsor Twp., on November 17, 1922, and was the daughter of the late George W. and Rosie M. (Graham) Poff. Pauline was a cigar maker and also worked at the former Hellam Furniture Factory. She was a member of Prayer Mission Church, and she attended Springville Church in Wrightsville for 51 years. Surviving are a son, Ronald R. Reichard and his wife, Darlene of Red Lion; a grandson, Bryan R. Reichard of Windsor and his wife Diane; a great granddaughter, Teah L. Reichard of Windsor and numerous nieces and nephews. She was preceded in death by four siblings. There will be a viewing from 12 noon to 1 p.. Tuesday, September 30, at Burg Funeral Home, Inc., 134 W. Broadway, Red Lion. A Service of Honor and Praise for Pauline will begin at 1 p.m. at the funeral home with her Pastor, Levere Crawford of Springville Church officiating. Burial will be at MacPelah Cemetery. In lieu of flowers, contributions may be offered to Alzeheimer's Association GPA, 3544 Progress Ave., St. 205, Harrisburg, PA 17110. Pauline was a wonderful Mother and Grandmother who always put her family before her own needs. She enjoyed cleaning and helped others with domestic cleaning over the years. She will be greatly missed by all who knew and loved her. Online condolences may be offered at www.BurgFuneralHome.com

Pauline S. (Poff) Reichard, formerly of Wrighstville, entered into eternal rest after a lengthy illness at 12:10 a.m. Thursday, September 25, 2014, at Pleasant Acres Nursing Home. She was the wife of Junior B. Reichard, who entered into rest... View Obituary & Service Information

The family of Pauline S. (Poff) Reichard created this Life Tributes page to make it easy to share your memories.