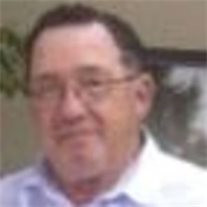 RED LION Preston "Prett" E. Markel, Sr., 70, peacefully entered into rest at 2:33 p.m. Thursday, July 21, 2011, at Pleasant Acres Nursing and Rehabilitation Center. He was the husband of Darlene D. (Shaw) Markel, whom he married August 6, 1960. The couple celebrated 50 wonderful years together. He was born in York, on March 26, 1941, and was the son of the late Luther Enfield and Florine Viola Markel. Mr. Markel attended St. Paul Church in Stewartstown. He retired after 36 years of service with ACCO, where he was a welder and a machine operator. In addition to his beloved wife, he is survived by four sons, Preston Markel, Jr. and wife, Lisa of Brogue, Barry Markel of Windsor, Randy Markel and wife, Crystal of Windsor, and Raymond Markel of Red Lion; one daughter, Bev Orwig of Red Lion; six grandchildren, Ashley, Amanda, Nicole, Lyndsey, Denny, and Robert; two great-grandchildren, Alexis and Anthony; and his faithful golden retriever, Bindy. Viewing will be Tuesday from 9 to 10 a.m. at St. Paul Church, 14874 Winterstown Road, Stewartstown 17363, followed by a 10 a.m. service. Pastor Howard Edmunson will officiate. Burial will be at Red Lion Cemetery. Burg Funeral Home, Inc., 134 W. Broadway, Red Lion, is handling the arrangements. In lieu of flowers, contributions may be offered to St Paul Church, 14874 Winterstown Road, Stewartstown, PA 17363. Prett was a loving husband and a dedicated father, grandfather, and great-grandfather who enjoyed spending time with his family, and who loved his dogs. He will be greatly missed.

The family of Preston "Prett" Markel, Sr. created this Life Tributes page to make it easy to share your memories.

Send flowers to the Sr. family.