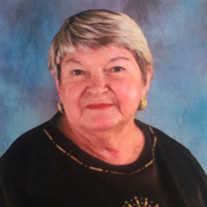 Quinetta Euphema (Strong) Kraft, of Red Lion, went from life to Life Eternal on Sunday, May 16, 2021 at 4:20 PM at her residence at the age of 85. She was born in Mount Wolf on February 27, 1936 and was the daughter of the late Henry A. and Edith L. (Sipe) Strong. Quinetta was a graduate of West Manchester High School, Class of 1954. She worked for the former McCroy’s, Walgreens and eventually retired from Publix after many years. Quinetta was a member of Windsor Assembly of God and was involved with the card minstry. She enjoyed volunteering her time with Lutheran Social Services, working on her jigsaw puzzles and spending time with her family who she loved dearly. Quinetta leaves behind her two sons, Jeffrey S. Reed (Melody) of Telford, PA and Lyle D. Reed (Chip) of Windsor and her two daughters, Vicki M. Reed of Red Lion and Angela S. Robinson (Donald) of Largo, FL. She also leaves behind her 14 grandchildren and 17 great grandchildren, with one on the way, as well as her brother, Scott Strong, of Manchester and numerous nieces and nephews. Quinetta was preceded in death by her son, Troy L. Reed who passed in 1980, her grandson, Donald Robinson, Jr., who passed in 1987, her sister Norma Jean Strong and brother John H. Strong. Cremation will take place with Burg Funeral Home, Inc., 134 W. Broadway, Red Lion. Services and burial will be private and at the convenience of the family at a later date. Contributions in Quinetta’s memory may be offered to Windsor Assembly of God, 21 N. Penn Street, Windsor, PA 17366

The family of Quinetta E. (Strong) Kraft created this Life Tributes page to make it easy to share your memories.

Send flowers to the Kraft family.