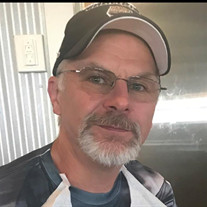 Randy W. Stermer, of York, entered into God’s eternal care, unexpectedly, after a massive heart attack, at 6:04 pm at UPMC Pinnacle Memorial, on Sunday, January 13, 2019 at the age of 52. He was the husband of Lisa L. (Schwankl) Stermer, to whom he married on October 8, 2011. Randy was the love of her life, her best friend and husband and he absolutely adored her. He was born on March 5, 1966 in York, and was the son of Fayne H. (Gohn) Stermer of Wrightsville, and also Wayne E. Stermer of Red Lion. Randy was a graduate of the Eastern High School, Class of 1984. After graduation he pursued a career in the maintenance field at Pleasant Acres Nursing and Rehabilitation Center, retiring in March of 2018, after 35 years of service. Because of his desire to share his knowledge of maintenance, and talents, he continued his journey in May of 2018, with a part time position at the Masonic Villages in Elizabethtown. Randy was a very active part of the Craley Community Fire Company, since his teenage years and through his adult life. He served the Fire Company as Lieutenant and later Captain from 2006 – 2009. Randy continued his service with the fire company as an Advisor and Mentor for the Junior Fire Fighters. He was a big supporter to the fire company during fund raisers and promotions. Craley Days Celebration, being a big part of that community, was also important to Randy where he served as a volunteer. He was a member of the Craley Cemetery Board and took much honor and dedication in caring for the Craley War Monument and grounds. He also worked part time at mowing and landscaping. Randy enjoyed his sports, especially football and hockey, having collected various special memorabilia items. His favorite team was the Washington Capitals, especially their winning the Stanley Cup. In addition to his parents, and his loving wife of seven years, Randy is survived by one step-daughter, Brittany C. Biddison of Scranton, and two step sons, Stephen Biddison of Willow Street and Colin M. Hendrix of York. He was the step grandfather to, Parker and Chaynce Biddison and he and Lisa where anxiously awaiting two more grandbabies this year. Randy has a half-sister, Amy Stermer of Dallastown, an uncle, Wayne Gohn and wife Rosie of Wrightsville, Aunts, Elaine Olphin of York, and Laraine Howard and Charlie of Red Lion, along with his cousins, Gary Olphin Sr. and wife Sharon of Wrightsville, Gary Olphin Jr. of Wrightsville and his two children Kingston and Karson, and Eric Gohn of York and his two children Kaci and Evan. He leaves his mother in law, Christine S. Schwankl of York, and a brother in law, Christopher J. Schwankl of Lititz. Randy also leaves behind his three cherished k-9 companions, who were his world, Cheli, Harley and Hershey Bear. He was preceded in death by his maternal grandparents, Kenneth W. and Mary Romaine Gohn and paternal grandparents, Emory and Olive Stermer and a sister in law, Natalie Schwankl. Randy’s viewing will be on Friday, January 18th from 10 to noon, followed by a Service to Honor and Praise his life to begin at noon Friday, at Waters Edge Church, 471 Abel’s Road, Wrightsville, with his pastor, Rev. Terry Robinson, officiating. Cremation will follow the service with Burg Funeral Home, Inc., 134 W.Broadway, Red Lion. Burial will be private and at the convenience of the family. Randy will always be remembered for his kind heart, and great sense of humor. He was an organ donor, so even in death, he continues to serve others. I know how much you love me, as much as I love you, and each time you think of me, I know you’ll miss me too. When tomorrow starts without me, don’t think we’re far apart, for every time you think of me, I’M RIGHT HERE IN YOUR HEART. In lieu of flowers, contributions may be offered to: Craley Community Fire Company, PO Box 203, Craley, PA 17312, or to York County SPCA, 3159 Susquehanna Trail North, York, PA 17406

Randy W. Stermer, of York, entered into God&#8217;s eternal care, unexpectedly, after a massive heart attack, at 6:04 pm at UPMC Pinnacle Memorial, on Sunday, January 13, 2019 at the age of 52. He was the husband of Lisa L. (Schwankl) Stermer,... View Obituary & Service Information

The family of Randy W. Stermer created this Life Tributes page to make it easy to share your memories.

Send flowers to the Stermer family.