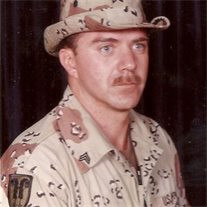 Ray A. Rexroth of Red Lion, entered into eternal rest , unexpectedly and into the hands and presence of our Lord, on Tuesday, March 1st, at 9:09 pm at Lebanon VA Medical Center in Lebanon, PA at the age of 56. He leaves his fiancee', Bonnie M. Beaverson of Red Lion. He was born in York on January 19, 1960 and is the son of Fay R. (Hoffmaster) Rexroth of Felton and the late Charles L. Rexroth. Ray spent twenty years serving his country with the United States Army from which he retired. He was deployed during the Persian Gulf during Desert Shield and Desert Storm and was a Sgt. with the Army National Guard of York, Battery F, 109th Division. He also worked in construction with Kinsley Construction Company. Ray leaves to cherish his memory a son, Kevin A. Rexroth of Bedford, VA, two daughters, Sheena R. Rexroth-Searcy and her husband Justin of Bedford, VA and Shania E. Rexroth of Windsor. Two granddaughters, Skye Searcy and Moxxi Searcy both of Bedford, VA, three brothers, Rick E. Rexroth of Red Lion, Rodney L. Rexroth of Wisconsin, Ronald "Whitey" E. Rexroth and his wife Pit of Windsor, two sisters, Robin S. Rexroth-Huff and her husband Brian of Felton and Rita M. Rexroth-Ebbott and her husband Scott of Wisconsin, his ex-wife, Kathleen M. (Olp) Rexroth of Burkesville, KY., nieces and nephews, Carla Rexroth, Amanda Rexroth, David Rexroth, Daniel Rexroth, Charles Rexroth and his wife Tabby, Nathanial Huff, Caleb Ebbott, Mary Ebbott and Isaac Ebbott, and great nieces and nephews, Christian Rexroth, Britney Rexroth, Eliza Parr and Tyler Rexroth. He was preceded in death by a brother, Randy L. Rexroth in October, 1968. There will be no viewing. Cremation will take place with Burg Funeral Home, Inc., 134 W. Broadway, Red Lion. Graveside services will be scheduled at a later date in Indiantown Gap National Cemetery in Annville, Pennsylvania, where he will receive full military honors. In lieu of flowers, the family has requested that contributions in memory of Ray be offered to the York County Veterans Honor Guard, c/o John V., 670 Hammond Road, York, PA 17406. Ray is remembered by his family as being a very loving, kind and gentle man who at times could be very outspoken. You never said "I'm leaving, you never said "good-bye". You were gone before we knew it, and only God knows why. A million times we needed you, a million times we cried. If love alone could have saved you, you never would have died. In life we loved you dearly, in death we love you still. In our hearts we hold a place, that only YOU can fill. Always Missing You. Your family.

Ray A. Rexroth of Red Lion, entered into eternal rest , unexpectedly and into the hands and presence of our Lord, on Tuesday, March 1st, at 9:09 pm at Lebanon VA Medical Center in Lebanon, PA at the age of 56. He leaves his fiancee', Bonnie... View Obituary & Service Information

The family of Ray A. Rexroth created this Life Tributes page to make it easy to share your memories.

Send flowers to the A. Rexroth family.