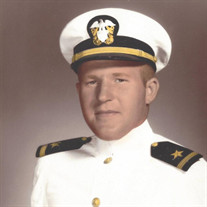 Ray Galen Mentzer, of York, went to be with his lord and savior on Saturday, February 27, 2021, at 12:00 pm at the age of 84, at Wellspan York Hospital. He was the loving husband of Patricia A. (Gable) Mentzer, with whom he married on December 13, 1958, sharing 62 years together. Ray was born in Waynesboro, PA on June 3, 1936, and was the son of the late George and Emma Belle (Strosnider) Mentzer. Ray graduated from Washington Township High School in Waynesboro in 1954 and went on to obtain a Bachelor’s Degree from Shippensburg University and then a Master’s Degree in business administration from Western Maryland University. Ray had a 28-year career in education which included 3 years teaching 6th grade at Leaders Heights Elementary school, 3 years teaching 6th grade in West York School District, and 22 years as principal at Centerville Elementary School in Hempfield School District. Ray proudly served in the U.S.Navy for 22 years. He served as the Commander of the USS Little Rock and he served as the lieutenant on board the USS Ute where he was a deep-sea salvage diver. Ray truly loved his career in the Navy. Ray was also a 32° Mason and he held memberships in Zaredetha-White Rose lodge #451 of the free and accepted Masons, Harrisburg Consistory and Scottish Rite, Tall Cedars of Lebanon, and the National Association of Fleet Tug Sailors (NAFTS). Ray was a past Scoutmaster of Troop 50, Spry, PA. He was a member of LCBC Church in Manheim and Living Word Community Church. He also spent a great deal of time volunteering with the York County Special Olympics. Ray learned the art of the masonry trade from his grandfather and father which he then turned around and spent the rest of his life teaching to his son and grandchildren. He often said that he was an educator by profession but a mason by trade. Besides his wife, Patt, Ray is survived by his son, Eric Ray Mentzer, and wife, Lorna of York, his three grandsons, Amos John Mentzer, and wife, Samantha, of York, Devan Edward James and wife, Breanna of Baltimore, and Alexander Galen Mentzer, of York. He is survived by his granddaughter, Kira Mackenzie Mentzer, of York, and his two great-grandsons, Aidan Patrick Maly, of York and Caleb Edward James, of Baltimore. Viewings for Ray will be on Sunday, March 7 from 1-4 pm at Burg Funeral Home, Inc., 134 W. Broadway, Red Lion. A Masonic service will begin at 3:45 pm, Sunday, at the funeral home. A viewing will also be held on Monday, March 8 from 9-11 am at the funeral home. A service of Honor and Praise will then begin at 11 am with his pastor, Brian Rice, of Living Word Community Church in York, officiating. Burial will take place at Susquehanna Memorial Gardens with full military honors being presented by the York County Veterans Honor Guard.

Ray Galen Mentzer, of York, went to be with his lord and savior on Saturday, February 27, 2021, at 12:00 pm at the age of 84, at Wellspan York Hospital. He was the loving husband of Patricia A. (Gable) Mentzer, with whom he married on December... View Obituary & Service Information

The family of Ray G. Mentzer created this Life Tributes page to make it easy to share your memories.

Ray Galen Mentzer, of York, went to be with his lord and savior...

Send flowers to the Mentzer family.