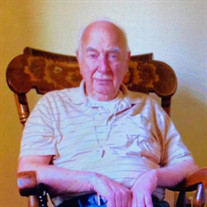 Rayburn A. Heyne, of York, entered into rest on Friday, January 15, 2021 at 11:55 am at Autumn House West at the age of 95. He was born in LaRue, PA on September 24, 1925 and was the son of the late Paul and Mazie (Biskar) Heyne. He worked at the Associated Grocers in York, filling orders, retiring after 18 years of employment. He was a WWII Army Veteran serving his country for two different tours of duty. While serving, he was awarded the Good Conduct Medal, World War II Victory Medal, and the Army of Occupation in Japan Medal. Rayburn was a Life member of the Veterans of Foreign Wars Post # 1446 in Red Lion and the American Legion Post # 543 in Red Lion. Rayburn loved singing and playing the guitar with family and friends from younger years until he was no longer able. He enjoyed visiting various churches around the area to worship. He is survived by his twin sister, Virginia Gembe, and his brother, Earnest Heyne of Dallastown. He is also survived by his caregivers, nephew, Delano Heyne and a niece, Lisa Kiser. Rayburn also leaves many other loving nieces and nephews to cherish his memory along with a very good friend Mildred Brown, who preceded him in death. A Graveside Service of Honor and Praise for Rayburn will be on Thursday, January 21st, at 10:30 AM at Crossroads United Methodist Church Cemetery. Full military rites will be offered by the York County Veterans Honor Guard. All those attending the service are asked to meet at the cemetery prior to the start of the service. Burg Funeral Home, Inc., 134 W. Broadway, Red Lion will be assisting the family with the arrangements. In lieu of flowers, contributions in memory of Rayburn may be offered to: Wounded Warrior Project, PO Box 758516, Topeka, Kansas 66675-8516. Online condolences may be offered to: www.BurgFuneralHome.com

The family of Rayburn A. Heyne created this Life Tributes page to make it easy to share your memories.

Rayburn A. Heyne, of York, entered into rest on Friday, January...

Send flowers to the Heyne family.