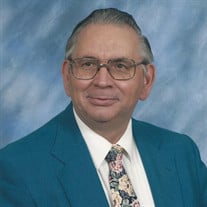 Rev. William (Bill) C. Smith, formerly of York, went to be with his Lord and Savior, on Tuesday, May 5, 2020, at 9:33 am, with family at his side, at Quarryville Presbyterian Retirement Community at the age of 83. He was the loving husband of Joann (Hinish) Smith of Quarryville, to whom he married on June 19, 1955, sharing 64 years of marriage. He was born on November 29, 1936, in Lakemont, and was the son of the late William C. Smith and Barbara L. (Riley) Smith Rickert and her late husband, Herbert Rickert. William graduated from Hollidaysburg High School, Findlay College and Evangelical Seminary of Myerstown. Prior to serving a church, Bill worked at the Morrison Cove Herald Paper from 1957 to 1960. He served many churches over the years, starting in Lakemont as Lay Supply pastor in 1960, was licensed in 1965, and then Ordained in 1980. Bill served in Brisbin, Sanborn, and Wallaceton in Clearfield County from 1960 to 1963. He next served at Matamoras/Stone Glen in Dauphin County, from 1963-1969. He moved his entire family to Lancaster County and served at the Smithville Church of God from 1970 to 1982. He, Joann, and Tim then moved to Windsor, serving the Windsor Church of God from 1982-2005, until his retirement. Bill was an interim pastor from 2005 till 2017 at the following Churches of God: York West Poplar Church, Mt. Olivet Church, Goldsboro and Newberrytown. He was a member of the Windsor Church of God. During his ministry, Bill served on mission trips to Haiti. Bill and Joann also enjoyed their trips to the Holy Lands, Hawaii, Germany, Austria, Switzerland, Mexico, Bermuda, and an Alaskan cruise. During his early retirement, Bill enjoyed attending flea markets. During his stay at Quarryville Presbyterian Home, Bill looked forward to playing bingo and doing jigsaw puzzles with his family. Bill leaves his five children, Beverly J. Buckwalter and her husband, Roy of East Petersburg; Beth Ann Jackson and her husband, Thomas of Quarryville; Christine L. Evans and her husband, Pastor Chandler of Quarryville; Connie L. Doutrich and her husband, Kevin of Conestoga ; Timothy “Tim” W. Smith and his wife, Karen of Dallastown. He was the proud grandfather of eleven grandchildren; Angela Jackson, Jason Doutrich, Heather Fellenbaum, Nick Evans, Natasha Deemer, Joshua Evans, Alisha Dommel, Andrew Doutrich, Matthew Jackson, Zac Smith and Sara Smith; as well as eighteen great grandchildren. Bill has five siblings: Kay Martin of Longwood, FL, Gloria Wishart of Douglassville, PA, David Smith of Dubuque, Iowa, James Smith of New Smyrna Beach, FL and Lynn Smith of Altoona, PA along with numerous nieces and nephews. Services will be private at this time with just immediate family members due to the current recommendations from Covid-19. Burial will take place at Windsor Church of God Cemetery in Windsor with his son in law, Chandler Evans, pastor of Mt. Nebo United Methodist Church officiating. A Memorial Service to Honor and Praise Rev. Smith will be scheduled and announced for a later date so friends and family may share condolences. Burg Funeral Home, Inc., 134 W. Broadway, Red Lion, is assisting the family with the arrangements. In lieu of flowers, contributions in Bill’s memory may be offered to: Windsor Church of God, 1125 Manor Rd, Windsor, PA 17366; or to the Hospice and Community Care of Lancaster, 685 Good Dr, Lancaster, PA 17604. The family would like to extend a sincere and heartfelt thank you to the staff at the Quarryville Presbyterian Home for the amazing, loving care that was given to my husband and our father and also to the Hospice members, during this difficult time. To leave the family an online condolence, please visit: www.BurgFuneralHome.com

Rev. William (Bill) C. Smith, formerly of York, went to be with his Lord and Savior, on Tuesday, May 5, 2020, at 9:33 am, with family at his side, at Quarryville Presbyterian Retirement Community at the age of 83. He was the loving husband... View Obituary & Service Information

The family of Rev. William "Bill" C. Smith created this Life Tributes page to make it easy to share your memories.