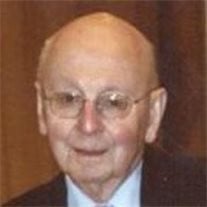 YORK Richard D. "Dick" Funk, 87, entered into rest after a brief illness at 2:55 a.m. Friday, January 21, 2011, at Manor Care Kingston Court. He was the husband of Jane M. (Miller) Funk, who entered into rest in 2006. He was born in Shippensburg, on February 16, 1923, and was the son of the late Amos M. and Edith May (Cormany) Funk. He owned and operated Richard D. Funk Painting and Papering, retiring at the age of 78. He was a 1941 graduate of Red Lion High School, where he was very active in athletics. Mr. Funk was a WWII Army veteran serving as a staff sergeant in the 102nd Infantry Division serving in Germany, France, and Holland. A lifetime member of Grace United Methodist Church in Windsor, he held many offices there, the last one being President of the Trustees. He was also a member of American Legion Post #543. He was an avid hunter, and loved fishing and being outdoors. Surviving are one daughter, Pamela Cunningham and husband, Scott of York; one stepson, David Miller of Lancaster; three grandchildren, Brett R. Glatfelter of Philadelphia, Missi Dehoff of Windsor, and Chadd Miller of Florida; two great-grandchildren, Amber and Taylor Ritter of Windsor; one sister, Lorraine Clugston of Shippensburg; two half brothers, Timothy and David Funk; and several nieces and nephews. He was preceded in death by four brothers, Emory, Robert, Leroy, and Junior Funk; and three sisters, Martha Wolff, Mildred Rockwell, and Mary Shatzer. There will be a viewing from 9 to 10 a.m. Monday, followed by a 10 a.m. funeral service at Grace United Methodist Church, 11 W. Main St., Windsor. His pastor, the Rev. Dr. D. Guy Carrigan, Jr., will officiate. Burial will be in Susquehanna Memorial Gardens with full military rites given by the York County Veterans Honor Guard. Burg Funeral Home, Inc., 134 W. Broadway, Red Lion, is handling the arrangements. In lieu of flowers, contributions may be offered to York County Veterans Honor Guard, c/o John M. Vecero, Jr., 670 Hammond Road, York, PA 17406.

The family of Richard "Dick" Funk created this Life Tributes page to make it easy to share your memories.

Send flowers to the Funk family.