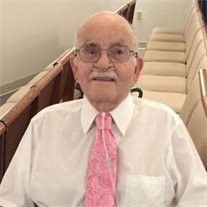 Richard E. Hengst, entered into eternal rest on Saturday, July 18, 2015, at 11:50 a.m. at York Hospital at the age of 89. he was the husband of Lois Mae (Ritz) Hengst who entered into rest on August 30, 2012. Richard was born in Jacobus on February 23, 1926 and was the son of the late Urban R. and Lottie (Shearer) Hengst. Richard worked at Ryan's Auto Body, then Moore Cadillac and Griffith Cadillac in York, retiring after many years of service and was an United States Navy veteran. Survivors include two sons, Ronald E. Hengst, Sr. and wife, Debra L. of Red Lion and Randal E. Hengst and wife, Tammy E. of Red Lion; daughter, Bonnie L. (Hengst) Hess Hammon and husband, Ronald E. Sr.; three grandchildren, Ronald Hengst, Jr. and wife, Patti of Florida, Sonia M. Guyer and husband, Mark of York and Ryan E. Hess of Calif.; three great-grandchildren, Lauren, Evan and Owen; numerous nieces and nephews. He was preceded in death by three brothers and five sisters. A viewing will be held Wednesday, July 22 from 11 to 12 p.m. at Burg Funeral Home, Inc., 134 W. Broadway, Red Lion. A Service of Honor and Praise for Richard will begin at 12 p.m. on Wednesday at the funeral home. The Rev. Stephany S. Sechrist, retired United Methodist pastor, will officiate. Burial will be at Susquehanna Memorial Gardens with full military rites presented by the York County Veterans Honor Guard. In Lieu of flowers, contributions may be offered to the American Lung Association of PA, 3001 Old Gettysburg Rd., Camp Hill, PA 17011 or American Heart Association , 610 Community Way, Lancaster, PA 17402. Richard was an avid hunter and a fan of the Orioles baseball team. He was a loving husband, father and grandfather, who will be greatly missed by all who knew and loved him. www.BurgFuneralHome.com

Richard E. Hengst, entered into eternal rest on Saturday, July 18, 2015, at 11:50 a.m. at York Hospital at the age of 89. he was the husband of Lois Mae (Ritz) Hengst who entered into rest on August 30, 2012. Richard was born in Jacobus on February... View Obituary & Service Information

The family of Richard E. Hengst created this Life Tributes page to make it easy to share your memories.

Send flowers to the Hengst family.