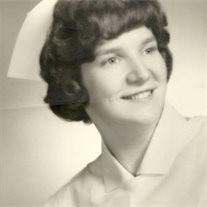 Rita Kay Marshall Starner died at home on May 30, 2015. She was the daughter of Robert T. and Ruth V. (Fry) Marshall. Rita is survived by her husband of 47 years, Roy Richard Starner, Jr.; their son, Thad Eugene Starner of Atlanta and his wife, Tavenner Hall; her sister, Holly Zumbrum of Hanover; and a brother, Lynn Marshall of Elk Park, N.C. She was preceded in death by two brothers, Ronny and Gary "Shine" Marshall. Born on April 5, 1944, in Dallastown, she graduated from Dallastown Area High School and the York Hospital School of Nursing. Rita loved serving her community. Among other activities, she volunteered for the York Rescue Mission for 22 years. At Christ Lutheran Church of Dallastown, she taught 8th grade Sunday school and children's choir and volunteered as a sexton. She was also a leader for Cub Scout Pack 43. As a teen, Rita sang, danced, and played the accordion and clarinet with a small group, entertaining in venues such as local nursing homes and the VA hospital. In her youth, she performed regularly on WSBA-TV's Ruth Marshall Show, formerly WNOW-TV's Children's Hour. Rita was a registered nurse employed as a supervisor at the York Hospital ER, at several nursing homes, and by hospice. She worked for the American Lung Association and was active in its asthma program for children and Freedom From Smoking program. She worked for several local physicians as an RN and surgical nurse. She took an early retirement to care for her father and then her mother, as well as other family and friends. Rita had a lifelong spirit of adventure and fun. As a young woman, Rita and her sister won a contest at the Dallastown Fair and went to the Atlantic City Steel Pier to perform for a week on Tony Grant's Stars of Tomorrow. She was the social butterfly of garage sales and bargain shopping. She enjoyed giving away her finds to those in need or just to surprise someone. Rita requested her physical body be donated to medical science in the hope of helping research and to train the medical community in helping others. Her family knows her spiritual body is with her Lord and Savior. "Well done, good and faithful servant" (Matthew 25:23). A memorial service will be held at Christ Lutheran Church, 126 W Main St., Dallastown, on June 6, 2015 at 3 pm. Arrangements are by Burg Funeral Home, Red Lion. Online condolences may be offered at www.burgfuneralhome.com In the spirit of Rita's life, the family requests donations be made to a favorite charity in lieu of flowers.

Rita Kay Marshall Starner died at home on May 30, 2015. She was the daughter of Robert T. and Ruth V. (Fry) Marshall. Rita is survived by her husband of 47 years, Roy Richard Starner, Jr.; their son, Thad Eugene Starner of Atlanta and his wife,... View Obituary & Service Information

The family of Rita Kay (Marshall) Starner created this Life Tributes page to make it easy to share your memories.