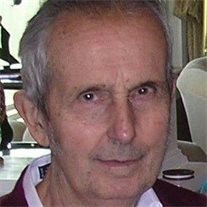 YORK Robert D. Barnhart, 82, entered into eternal rest at 11:10 p.m. Wednesday, July 23, 2014, at York Hospital after a brief illness. He was the husband of Joan K. (Gibson) Barnhart, who entered into rest on April 14, 2012. He was born in Delta, on June 26, 1932, and was the son of the late Raymond E. and Edna R. (Dellinger) Barnhart. Robert worked at AWI for many years, then at Central High School and Weis Markets. He was a longtime and active member of St. Matthew Evangelical Lutheran Church in York. Surviving are two sons, David A. Barnhart and wife, Carmen of York, and Steven D. Barnhart and wife, Lorna of Elkridge, Md.; a stepson, Gregory E. Sheaffer and wife, Lori of York; six grandchildren, Anthony and Abigail Barnhart of York, Jessica Gambrill of Maryland, Hannah Barnhart of Maryland, and Amanda and Andrew Sheaffer of York; a sister, Phyllis Holtzapple of York; and a nephew, Mark Holtzapple of York. There will be a viewing from 9 to 10 a.m. Tuesday, July 29, at Burg Funeral Home, Inc., 134 W. Broadway, Red Lion. A Service of Honor and Praise for Robert will begin at 10 a.m. on Tuesday at the funeral home with his pastor, the Rev. Kevin T. Shively, officiating. Burial will be at Susquehanna Memorial Gardens. In lieu of flowers, contributions may be offered to St. Matthew Evangelical Lutheran Church, 839 W. Market St., York, PA 17401. Robert was a very kind, loving, generous man who always had a positive outlook in life. His family came first and were very important to him and spending family time together was one of his favorite things to do. He loved all sports but was an avid baseball fan, being especially fond of the Red Sox. He enjoyed playing cards with his friends. He was happy all the time and he shared this with everyone. He will be missed by all who knew and loved him. Online condolences may be offered at www.BurgFuneralHome.com  .

The family of Robert D. Barnhart created this Life Tributes page to make it easy to share your memories.

Send flowers to the Barnhart family.