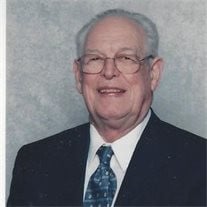 Robert A. Jones, departed this life on Monday, May 29, 2017 at 8:53 am at the Mennonite Home in Lancaster at the age of 96. He was the loving husband of Joanne A. (Posey) Jones to whom he married on January 25, 1947, celebrating 70 wonderful years together. He was born in Fawn Grove on April 10, 1921 and was the son of the late Arthur B. and Minnie F. (West) Jones. Robert graduated from Fawn Grove Vocational Technical School. He then entered the military, serving in the United States Army during World War II as a Master Sergeant in the 2nd Bombardment Squadron, 22nd Bombardment Group, 5th Army Air Force. During his military time he received the Good Conduct Medal, Distinguished Unit Badge, American Defense Service Medal, American Theatre Service Medal, Asiatic Pacific Service Medal with 6 Bronze Stars. He was a longtime member of the Veterans of Foreign Wars, Post 7046, Stewartstown . Robert was an electrician at Harris Electric Service in Fawn Grove, PA, retiring after many years of employment and a past member of Faith Orthodox Presbyterian Church in Fawn Grove for 54 years and a current member of Westminster Presbyterian Church in Lancaster. He leaves his loving wife Joanne of Lancaster, and a brother, Richard A. Jones of Brogue and numerous nieces and nephews. He was preceded in death by his sister, Nancy Harris Robertson. Viewing will be on Monday, June 5th from 9-10 am at Burg Funeral Home, Inc., 134 W. Broadway, Red Lion. A Service of Honor and Praise for Robert will begin at 10 am at the funeral home with Rev. Dr. Douglas C. Winward, retired Presbyterian pastor, officiating. Interment will follow the service at Chanceford Presbyterian Cemetery in Airville with Rev. Keith Irvine, Associate Pastor of Westminster Presbyterian Church in Lancaster officiating at the committal. Flag folding ceremony will be presented by the York County Veterans Honor Guard. A Memorial Service to celebrate Robert's life with those he and his wife, Joanne have come to know over the past 17 years will be held on Monday, June 5th at 3 pm at the Mennonite Home, 1520 Harrisburg Pike, Lancaster, PA., with Rev. Dennis W. Ernest , chaplain of the Mennonite Home, officiating. In lieu of flowers, contributions may be offered to: Westminster Presbyterian Church, 2151 Oregon Pike, Lancaster, PA 17601 or to Faith Orthodox Presbyterian Church, 405 N. Market St., Fawn Grove, PA 17321.

Robert A. Jones, departed this life on Monday, May 29, 2017 at 8:53 am at the Mennonite Home in Lancaster at the age of 96. He was the loving husband of Joanne A. (Posey) Jones to whom he married on January 25, 1947, celebrating 70 wonderful... View Obituary & Service Information

The family of Robert A. Jones created this Life Tributes page to make it easy to share your memories.

Send flowers to the Jones family.