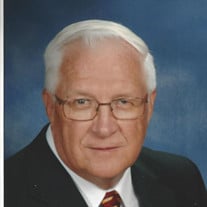 Robert D. Kline of Craley took the Lord’s hand when he heard Him call, and went on to his Eternal Home, on Thursday, November 5, 2020 at 12:40 pm at Wellspan York Hospital after a brief illness at the age of 76. He was the loving husband of Gloria A. (Shearer) Kline of Craley, to whom he married on August 29, 1970, just celebrating 50 years of marriage together. Robert was born in Craley on September 13, 1944 and was the son of the late Carl and Margaret M. (Miller) Kline. He graduated from Red Lion High School, Class of 1962, and went on to York College receiving an Associates Degree in 1964. After college he was inducted into the United States Army. Robert was a claims manager for G.A. & F.C. Wagman for 45 years, retiring in 2009, and then worked as the Tax Collector of Lower Windsor Township for 8 years. He was a member of the Craley Fire Company Station #44, a former member of the Rainbow Chapter #517, Order of the Eastern Star, a member of the Friendship Lodge #663 Free and Accepted Masons in Wrightsville, Susquehanna Senior Center, and the Model A Restorers Club. He was a very active and life member of Bethel United Methodist Church in Brogue and a member of the Gideons International. He is survived by his wife, Gloria, a son Duane C. Kline and his wife Miranda of York and a daughter Denise A. Wade and her husband William of Wake Forest, North Carolina. He was the loving grandfather of Abigail M., and Rachel E. Wade and his grand dog, Chandler. There will be no viewing. Services will be private and at the convenience of the family. His pastor Rev. Kim Cartwright will be officiating, and burial will be at Bethel UM Cemetery with flag folding ceremony offered by the York County Veterans Honor Guard. A Memorial Service to Honor and Praise Robert’s life will be scheduled and announced, for a later date. Burg Funeral Home, Inc., 134 W. Broadway, Red Lion will be assisting with the arrangements. In lieu of flowers, memorial contributions may be offered to Bethel United Methodist Church, 1674 Furnace Road, Brogue, PA 17309. www.BurgFuneralHomc.com

Robert D. Kline of Craley took the Lord&#8217;s hand when he heard Him call, and went on to his Eternal Home, on Thursday, November 5, 2020 at 12:40 pm at Wellspan York Hospital after a brief illness at the age of 76. He was the loving husband... View Obituary & Service Information

The family of Robert D. Kline created this Life Tributes page to make it easy to share your memories.

Robert D. Kline of Craley took the Lord’s hand when he heard...

Send flowers to the Kline family.