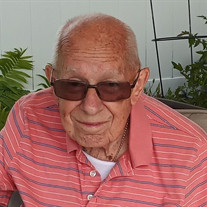 Robert “Bob” W. Witmer, of Manchester, went from life to Eternal Life, on Tuesday, November 12, 2019, at 4:55 pm at Milton S. Hershey Medical Center, after a brief illness, at the age of 87. He was the husband of the late Janet L. (Quickel) Witmer, with whom he is now reunited. Bob was born in Windsor, on November 28, 1931 and was the son of the late Russell W. and Hazel A. (Knisley) Witmer. He was a press operator at Standard Register in York, retiring in 1990 after 20 years of service. He was a member of AARP and a former member of the York Organ Club. He leaves his daughter, Susanne L. Cassell and her husband Clarence “Boot”, of Manchester, with whom he resided, and a son, Gary L. Brehm and his wife Deanna of Shippensburg. He was the loving grandfather to, Craig Shaffer, Gary Brehm, Jr. and Janet Brehm, as well as a great grandfather to several great grandchildren. Bob has numerous nieces and nephews and he leaves his companion poodle, Muffin. He was preceded in death by a grandson, Shawn Cassell who entered into rest on April 2, 2015, three brothers, Russell Witmer, Donald Witmer and Glenn Witmer, and a sister, Elaine Witmer. A viewing for Bob will be on Monday, November 18, 2019 from 10 to 11 am at Burg Funeral Home, Inc., 134 W. Broadway, Red Lion. A Service of Honor and Praise for Bob will begin at 11 am at the funeral home, with Rev. David D. Tietje, pastor of St. John’s United Church of Christ in Red Lion, officiating. Burial will take place in Windsor Cemetery. Bob was a very private man, enjoying time spent with his family, especially his daughter, Susanne, whom cared for him in her home. God saw you getting tired, and a cure was not to be, so He put his arms around you, and whispered, “Come to Me”. A golden heart stopped beating, hardworking hands now rest, God broke our hearts to prove to us, He only takes THE BEST. In lieu of flowers, contributions may be offered to: York County SPCA, 3159 Susquehanna Trail North, York, PA 17406.

The family of Robert W. Witmer created this Life Tributes page to make it easy to share your memories.

Send flowers to the Witmer family.